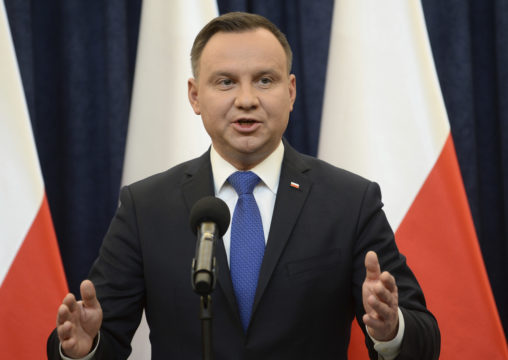 WARSAW, Poland (AP) — Poland’s president said Tuesday he will sign into law a controversial proposal to outlaw blaming Poland as a nation for crimes committed by Nazi Germany during the Holocaust.

But in an unusual move, President Andrzej Duda also said he will ask the country’s constitutional court to evaluate the bill — theoretically opening the way for parliament to amend it.

The law will impose prison terms of up to three years for statements attributing the crimes of Nazi Germany during World War II to the Polish nation.

Prime Minister Mateusz Morawiecki has said the law will prevent the Polish people as a whole from being blamed for what the Germans did in occupied Poland, the location of Auschwitz and other Nazi camps.

It has caused a diplomatic crisis with Israel, which fears it will enable Poland to whitewash the role of Poles who killed or denounced Jews during the German occupation of Poland during World War II. The United States also strongly opposed the legislation, saying it could hurt Poland’s strategic relations with Israel and the U.S.

It is not clear whether the Constitutional Tribunal will ask for any changes, as it is controlled by Poland’s conservative ruling Law and Justice party.