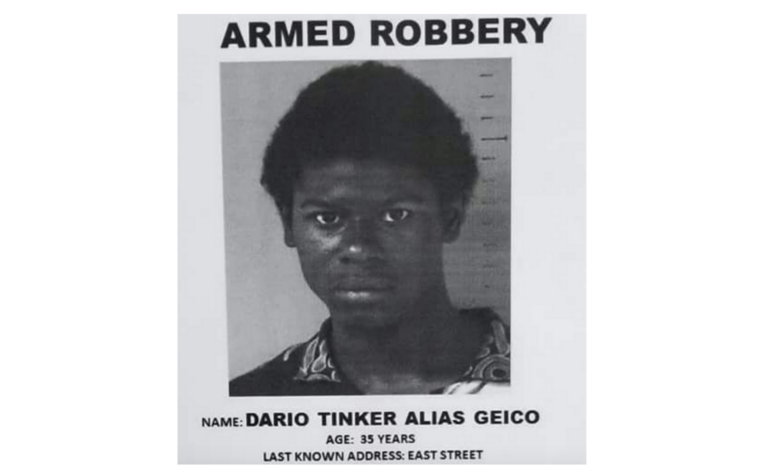 Police have discontinued the manhunt for 35-year-old Dario Tinker alias “Geico” who had been on the run for several weeks.

Police suspect him to be the man killed off Williams Lane Friday afternoon in a police-involved shooting.

Tinker was wanted for questioning for incidents involving armed robbery and rape.

According to intelligence, shortly after 6:00 p.m., officers were dispatched to Williams Lane after receiving information on the siting of an individual who was wanted by police.

Upon arrival, officers saw Tinker sitting in a small silver vehicle, who then attempted to drive off and pinning two officers between his vehicle and another. It is alleged that Tinker then produced a firearm and fired at the officers.

BEing in fear of their lives, the officers returned fire and Tinker was fatally shot.

Police say on further examination of the vehicle, it was discovered that the silver vehicle had been taken in a previous armed robbery, where the owner had been robbed at gunpoint two days prior.

Assistant Commissioner of Police Clayton Fernander told media Friday evening that a loaded pistol was also found in the car just between the seats.

“The officers involved are shaken up, but (they have) no injuries and they will seek whatever attention they need from hospital if they feel they have any but they are shaken up but they are fine,” Fernander said.

I just want to let the Bahamian people know hat they are police officers – we are up and about in the communities to ensure that they are safe.

“Just two night ago, as the result of an armed robbery in progress in the Palmdale area, officers responded and caught the three individuals just leaving the scene and a weapon was recovered in that. and that matter is still under active investigation.

“So, the police are up and about and I just want to continue to ask members of the public to support their police and we appreciate that relationship. And, whatever information that they hare with us to ensure that they’re communities are safe.

Police had been looking for Tinker for nearly two months before Friday.