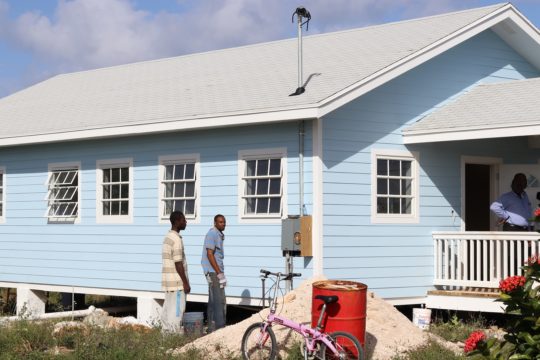 Just over two years after Hurricane Joaquin devastated the central and southern Bahamas, victims rendered homeless by the storm are receiving much-needed aid thanks to the efforts of the personnel from the National Emergency Management Agency (NEMA).

With a price tag of more than $1 million, nine new homes, which were rebuilt as part of phase two of the agency’s Hurricane Joaquin reconstruction project, were gifted to families in need of a permanent residence.

The homes were built on three of the islands affected by the hurricane with six on Long Island, two homes on Rum Cay and one on San Salvador.

Candidates for the new homes were selected based on need and the severity of devastation sustained as a result of the storm. The elderly, the disabled and single parents took priority in this endeavour.

A technical team led by NEMA Director, Captain Stephen Russell, went to the three islands on January 22 to inspect the recently-built homes.

The team also took the opportunity to inspect the construction of the dock and boat ramp in Rum Cay.

Captain Russell thanked the homeowners for their patience and the contractors for their high standards in quality of work. He said plans are underway to move “full speed ahead” to assist individuals impacted by Hurricanes Matthew and Irma of 2016 and 2017, respectively.