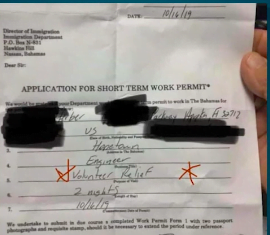 NASSAU, BAHAMAS – Independent volunteers will need to register with the National Emergency Management Agency (NEMA) or pay immigration fees, according to Minister of Immigration Elsworth Johnson.

Johnson responded to concerns after several volunteers were forced to apply and pay for short-term work permits in order to provide aid.

One resident on Man-O-War Cay, in a now viral voice note, said when volunteers arrived, they were informed by Immigration officers that they needed to obtain a permit.

Eyewitness News Online obtained two of the volunteer applications, where both individuals had to pay $315.32 – which included the cost of the permit and processing – in order to offer their volunteer relief efforts for two nights.

“We must know who the persons are who are in the country,” he said.

“There have been general agencies that have come in, licensed international agencies.

“We know that small unidentified groups are coming in and purporting to volunteer.

“We still have an obligation, local, to the Bahamian public and to the international public, to ensure that we know who’s here, operating and moving within the Commonwealth of The Bahamas.”

However, Johnson noted the department does have a discretion to exempt those fees.

“When we allowed persons by way of the United Nations and all those groups that came in to assist, we made every attempt to ensure that due diligence was done,” he continued.

“…I’m not suggesting that anyone is untoward, but we still have an obligation to ensure that laws are complied with, that nobody misuses the privilege of coming into The Bahamas, purporting to assist, and do other things.”

Johnson further urged those individuals not volunteering with a registered organization to go through the National Emergency Management Agency (NEMA).

Dorian, the strongest storm to hit the northwest Bahamas, left thousands displaced and at least 65 dead.

More than a month later, Grand Bahama and Abaco remain in recovery mode without electricity and potable water in portions of the impacted areas.

“But we must be very careful that there can be unscrupulous individuals who would say that there are volunteers coming in to help rebuild and they may not necessarily be volunteers.

Minnis said: “But that matter will be addressed at the appropriate time by the minister with responsibility for immigration.

“As he and his team are looking at that matter to ensure that volunteers can enter our shores unobstructed and help to rebuild, but those who are coming with ulterior motive we will be able to recognize and deal with it appropriately.”

Perhaps if they had been so diligent in their immigration procedure and policy pre-Dorian, there would not be so many dead. But sure, let’s enforce due diligence now when these islands really need the help…. after all, dem Americans rich…. Dey could pay it, right????? *note sarcasm*

This the reason there is no improvement in the rebuilding of those islands volunteers should not be charged for a work permit, so many persons want to offer assistance, why is this government charging folks who want to help. Their immigration and border system has been shady since Lynden Pindling .