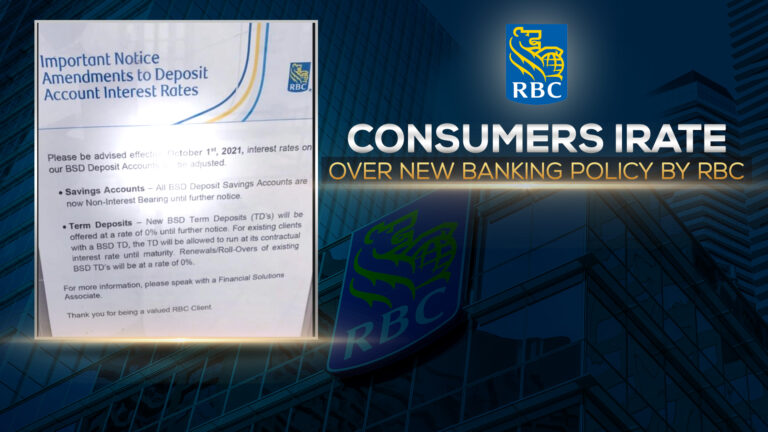 A notice from Royal Bank of Canada (RBC) Bahamas issued Wednesday, October 13, 2021, advising clients of a change in the interest policy.

Loretta Butler-Turner: Even if you put your money in a rock hole or under your mattress, it is more valuable than keeping it in RBC

NASSAU, BAHAMAS — Royal Bank of Canada (RBC) Bahamas has once again drawn the ire of its customers after the bank posted a notice indicating that as of October 1, Bahamian-dollar savings accounts and term deposits will bear no interest until further notice.

Requests made to the bank for comments and clarity on the matter were not responded to up to press time yesterday.

One social media poster commenting on the move said: “Obviously they want to leave The Bahamas. Instead of just exiting with grace, they prefer to make business unpleasant for the customer and ‘gently’ ease them towards the door and the decision to close their account(s).

Another stated: “So exactly how does The Bahamas benefit from this bank being here? They have reduced staff, they have taken away the benefits of savings, etc.”

“Assuming that this is true and authentic, this is what l must say,” said Butler-Turner.

“Firstly, I would advise any Bahamian or resident of The Bahamas who has any money in this bank to withdraw every penny without hesitancy.

“For depositing your money in their bank, essentially the value of your money is devalued. Yes, devalued because of the various fees charged, you are paying them to keep your hard-earned money.

“Even if you put your money in a rock hole or under your mattress, it is more valuable than keeping it in RBC.”

She added: “Your money is used for loans and they incur interest plus collateral from the borrower. On top of this, each month your reward for putting your money in their bank is taxed with service fees and all manner of other conjured fees.

“Further, we were advised in the papers last week that BSD$20 banknotes will no longer be dispensed from the RBC ATM machines because it is too costly.

“Seriously, they really need to close down and push out. And to think that they extract such huge returns from our Bahamas government. This is utterly unfathomable, unbelievable and unconscionable.”

The latest move comes just over a week after social media backlash erupted over the bank’s decision to discontinue the issuance of $20 bills at its ATMs.

At that time, the bank had stated in a notice that after reviewing its clients’ banking habits at its ATMs, it found “there was not a demand for $20 bills and made the change”.

RBC recommended that for smaller purchases, its customers use their RBC debit cards at the point of sale devices at retailers, restaurants and other services across the country.

The bank began implementing that change back in July and it has sparked outrage on social media. Central Bank Governor John Rolle said last week that the regulator was in talks with the Canadian bank over the decision.