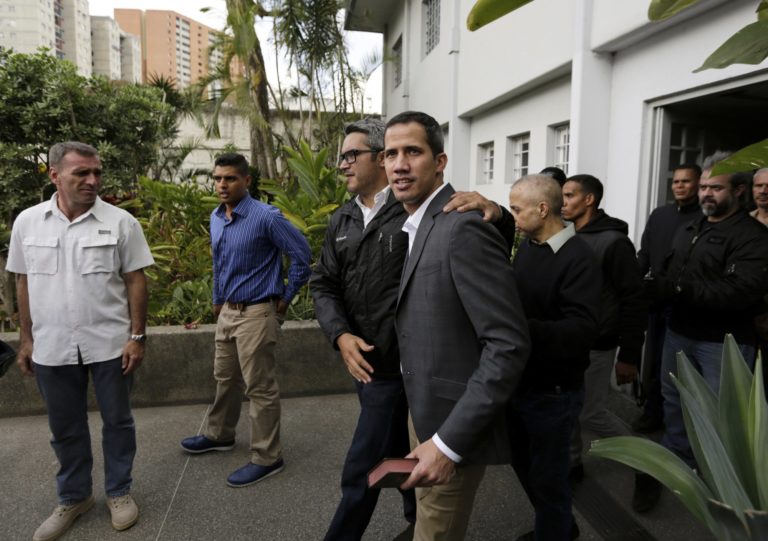 Venezuelan Congress President Juan Guaido, an opposition leader who has declared himself interim president, is surrounded by bodyguards a he leaves a meeting with leaders of public employee unions at the offices of an engineers’ association in Caracas, Venezuela, Tuesday, March 5, 2019. Guaido said police officials were among those at the meeting with state workers who rely heavily on government subsidies to get by in a country suffering from hyperinflation and shortages of food and other necessities. (AP Photo/Fernando Llano)

CARACAS, Venezuela (AP) — Appearing a day after his rival returned home to a tumultuous welcome, President Nicolas Maduro denounced his opponents in a speech Tuesday at a military ceremony but did not refer by name to opposition leader Juan Guaido. The man who says he is the rightful president, meanwhile, escalated his campaign to topple Maduro with an appeal for support from state unions, long reliant on government handouts.

The dueling scenes, evidence of the rift in a country in crisis, came as Venezuelans and the world awaited the next moves of two adversaries maneuvering for an edge in what could be a protracted struggle. The Maduro government’s decision not to move against Guaido upon his return to Venezuela on Monday reflects the intense pressure Maduro faces and, possibly, a calculation that restraint is the best tactic for now.

Still, Maduro was defiant during a ceremony marking the sixth anniversary of the death of his predecessor and mentor, Hugo Chavez, belittling a “minority of opportunists and cowards.” He said government supporters would hold a rally on Saturday, a “day of anti-imperialism” in his words, and a counter to U.S.-backed Guaido’s plans to hold nationwide protests the same day.

Maduro also pinned medals on members of the security forces involved in a crackdown on Guaido’s failed Feb. 23 attempt to bring humanitarian aid into Venezuela from Brazil and Colombia. Maduro has described the attempt, backed by the U.S. and its allies, as part of a plot to overthrow his government.

Hours earlier, Guaido said police officials were among those at a meeting that he held with leaders of public employee unions, which rely heavily on subsidies from Maduro’s government to get by in a country suffering from hyperinflation and shortages of food and other necessities.

“We’re not going to collaborate any longer with the dictatorship,” Guaido said after a meeting at the offices of an engineers’ association in Caracas. He urged state workers to prepare for a strike, though no date was given and he said an immediate priority will be to promote a law guaranteeing rights for public workers.

The 35-year-old leader of the opposition-controlled National Assembly said he would call a meeting of the legislature on Wednesday to craft the law.

Guaido had shrouded the route and timing of his return Monday in secrecy amid concerns he might be detained. Yet he breezed through airport immigration checks after a commercial flight from Panama and brazenly called for Maduro’s downfall at a rally where the presence of security forces was minimal.

The United States and other countries had warned Maduro not to move against his adversary, and he possibly realized arresting his foe could generate more street protests.

U.S. Sen. Marco Rubio, an influential voice in advocating U.S measures against Maduro, warned that the Venezuelan government could still act against Guaido in ways that it has refined against other opposition voices.

“Issue a standing arrest warrant from a rubber stamp court. Then at a time of their choosing, arrest him late at night with no media, diplomats or supporters around,” Rubio warned in a tweet.

While Guaido’s presence is likely to add at least short-term momentum to his campaign for political change, Maduro has proven resilient and still controls the organs of state, including the critical loyalty of top military officers. Some analysts speculate the two sides might consider behind-the-scenes negotiations as a way to end the standoff.

The U.S. envoy for Venezuela, Elliott Abrams, said in Washington that Maduro had presided over economic decline and human rights violations in Venezuela.

“In every democratic transition in Latin America there are negotiations, but I just would say it is extremely difficult to see how he could play a positive role in a democratic election,” Abrams said.

Venezuela is gripped by a humanitarian crisis that is expected to worsen as U.S. oil sanctions designed to put more pressure on Maduro take their toll.

The United States and some 50 other countries have recognized Guaido as the legitimate leader of Venezuela and have urged Maduro, who is backed by Russia, to resign so the country can prepare for elections. Guaido left Venezuela last month despite a court order banning him from foreign travel and visited Colombia, Brazil, Paraguay, Argentina and Ecuador.