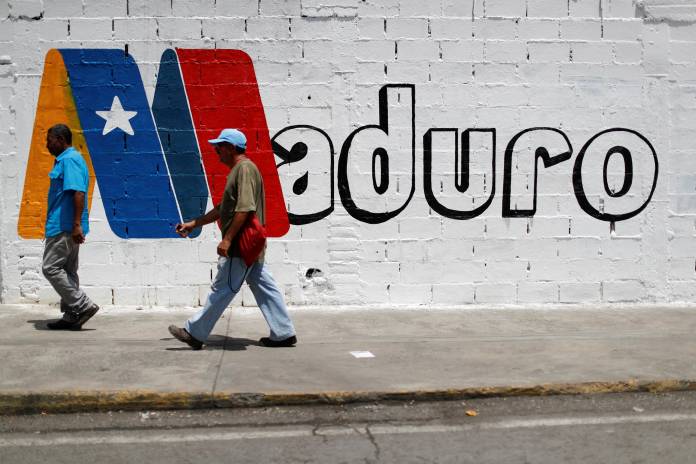 Supporters of Venezuela's President Nicolas Maduro walk past a campaign mural before a rally with him, in Charallave, Venezuela May 15, 2018. REUTERS/Carlos Garcia Rawlins

CARACAS, Venezuela — Venezuela’s May 20 presidential election may be an election in name only.

Nicolás Maduro is widely expected to be reelected as Venezuela’s president despite his 20 percent approval rating and profound mismanagement of the country’s humanitarian and economic crisis.

Maduro’s strongest competitor is Henri Falcón, a former state governor once associated with the Venezuelan opposition. But he broke ranks with opposition parties over their decision in February to boycott a presidential election they consider “fraudulent.”

The government has grown increasingly authoritarian since Maduro was narrowly elected in 2013 to succeed Hugo Chávez, Venezuela’s popular leftist leader and Maduro’s mentor. The Socialist regime is now deploying all its amassed powers to ensure that this disliked president wins reelection.

As a Venezuelan academic who has followed the country’s politics for two decades, I believe that voter participation on Sunday will merely legitimize Maduro’s regime by making it appear democratic.

Reasons not to vote

Mimicking democracy is a classic trick of authoritarian leaders worldwide.

Since announcing it would hold a 2018 presidential election, Maduro’s government has severely limited who can appear on the ballot. Four of the five most prominent opposition leaders have been either jailed or barred from office – a main reason for the boycott.

And since many Venezuelans view Falcón as a traitor whose bid for the presidency helps Maduro, millions of voters are without a viable candidate.

Legally, the election may be unconstitutional because it was called by the Constituent Assembly. The Socialist Party created and installed this legislative super body in 2017 to undermine the opposition-dominated Venezuelan National Assembly.

Many Venezuelans generally distrust their electoral system – for good reason.

Smartmatic, the London-based company that long provided Venezuela’s voting machines, announced that the turnout to vote for Maduro’s Constituent Assembly in 2017 was manipulated. It calculates that at least 1 million phantom voters were added to the final count. Similar problems were documented in Venezuela’s 2017 gubernatorial elections.

Hunger as a political tool

Maduro has also manipulated Venezuela’s spiraling humanitarian crisis to his electoral advantage. Since 2015 food, medicine, electricity and even clean water have grown ever scarcer in Venezuela.

Hunger is spreading. According to a February survey by three Venezuelan universities, almost 80 percent of respondents eat less than they used to. Sixty percent go to bed hungry. And nearly two-thirds have lost more than 20 pounds this past year.

In January 2017, Maduro’s regime introduced a national identification document that gives cardholders access to government food aid and other social services. But according to an investigation by El Nacional, Venezuela’s nonpartisan leading newspaper, citizens only get those benefits if they agreed to vote for Maduro when they signed up.

The international organization Human Rights Watch confirms this account. Its Americas researcher says citizens are “hostages of hunger,” with Maduro’s regime [exchanging food and other services] for votes.

Another key constituency that will be notably absent from Sunday’s election: Venezuelan refugees.

Over 4 million people have left the country in recent years, fleeing hunger, corruption and violence. Business professionals began leaving Venezuela after Chávez’s 1998 election, but mass migration has spiked since the crisis began in 2015.

To vote in Sunday’s presidential election, Venezuelans living abroad must show legal residence overseas. Since many refugees live undocumented for long periods of time, this requirement – passed in 2009 by Chávez’s Socialist Party – will disenfranchise an estimated 1 million Venezuelans.

The United States, Canada and numerous Latin American countries recently signed a joint statement asking Venezuela to cancel the May 20 election. All have threatened to ramp up sanctions if it goes forward, as has the European Union.

Maduro insists that the election will be held as planned.

The regime’s real challenge, then, could come after the vote. Increased sanctions could translate into an embargo on Venezuelan oil. International oil sales are by far the government’s main revenue source.

That would be devastating for Maduro’s cash-strapped government – not to mention the Venezuelan people.

This article was originally published on The Conversation. Read the original article.