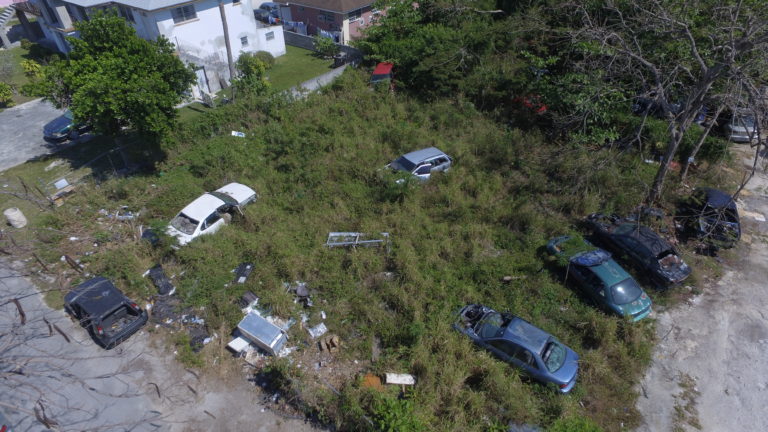 An aerial view of some derelict vehicles parked in Kennedy Subdivision, New Providence.

Unruly derelict vehicle owners are causing major problems for the Department of Environmental Health Services (DEHS), according to a private contractor hired by the government organization.

“Man, it’s dangerous out here ya know,” he lamented.

“When I tell you, they try to attack me, I really mean attack! They even burn down one of my trucks before man. They be carrying on bad and this is what cause me, and all the other private contractors, not to be able to pick-up all the vehicles we have on our list to remove.

In an effort to mitigate violent interactions with violators, Lil Sam – who has been a private contractor with DEHS for almost 20 years – shared that he would usually canvass areas to give verbal warnings.

“Some people say give them a week, but some people say, ‘you better leave this car alone’. This is where the problem starts. If they don’t allow me to do my job, it’s a backlog on my list,” he said.

“So now what I have to do whenever I get into these violent situations is, I have to take a list back to DEHS to let them know and then they will serve a court summons to the vehicle owners since they won’t allow me to do my job.”

On March 9, Eyewitness News Online highlighted the department’s efforts to rid the island of abandoned vehicles. More than a week later, it was revealed that a number of the cars, which had been identified as ‘derelict’, had not yet been removed.

Eyewitness News Online contacted DEHS Chief Health Inspector Sally Chisholm about the situation who affirmed that the department is continuing its drive to remove the vehicles daily, but not without issue.

“After our officers mark vehicles, a list is generated and given to our private contractors. We may give them a list of anywhere between 20 to 30 cars that need to be removed,” she explained.

“From time to time they may experience a slight setback in getting the job done, but we continue with our efforts to clean up these communities.”

DEHS has hired three contractors for the island wide clean-up however, there is currently no solution for the problem which Lil Sam said he and other contractors face, while attempting to complete their assigned pick-ups.

Chisholm said she hopes the clashes between private contractors and car owners can be put to an end soon and encouraged persons to move their vehicles immediately.