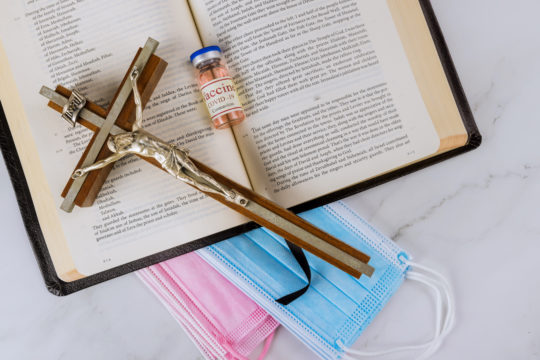 NASSAU, BAHAMAS — Pastor Mario Moxey, who leads the Bahamas Christian Council’s (BCC) COVID-19 Investigation Committee, said the church has not yet finalized its position on vaccines.

According to Moxey, the committee plans to issue a report and definitive position on the available and approved vaccines, including Oxford’s AstraZenca, following the completion of its research centered around the scientific data and moral implications of the vaccine.

“We’ve met already, several times,” said Moxey, adding that another round of meetings with health professionals was slated for some time next week.

“We’re in the process of developing our approach. The idea for us is to make a presentation to the Christian Council, which we can then present to the general public in terms of being able to provide advice. So, we are in the process of formulating that report right now.”

Concerns from some religious communities center around the use of decades-old aborted fetal cells in the development process — a common scientific practice to which some Christians object to because of “moral implications”.

But an international religious group including the Pontifical Academy for Life, the National Office for Health Pastoral Care and the Association of Italian Catholic Doctors, has said all clinically recommended vaccinations can be used with a “clear conscience and that the use of such vaccines does not signify some sort of cooperation with voluntary abortion”.

The group released its position in 2017, ahead of the global pandemic and subsequent rollout of a vaccine to inoculate against the virus — though the scientific application of the COVID vaccine follows similar processes.

While the timeline for the BCC investigative committee’s report was not provided, Moxey said there is an impetus to complete the work soon given the expected arrival of the vaccine in-country, and the desire for the report to be “relevant”.

“And we are working feverishly to do that.”

He said general surveying returned a consensus of concerns that were anticipated, and those concerns have been put before healthcare professionals.

Moxey was asked whether the church would advocate and push for its position, whether in approval or disapproval of taking the COVID-19.

He said: “At this point, we honestly don’t know. It’s too early for us to determine that and the idea for us is to present the information. The Christian Council has to determine what they would do as far [as] how far we are going to take the position.

“Now, bear in mind there are other denominations and quite a number of them are developing their own position on it.”

Catholic and Anglican archbishops of the United Kingdom and Australia have called for alternative medication not produced through abortion.

For example, Australian Archbishop Anthony Fisher urged the government of Australia to produce an “ethically uncontroversial alternative vaccine if one is achieved”.

The Bahamas was expected to receive 100,000 doses of AstraZeneca by the end of February.

The Office of the Prime Minister announced yesterday The Bahamas will receive 20,000 doses of the Oxford AstraZeneca vaccine donated from India tomorrow — Sunday, March 7.

The prime minister is expected to provide a live update on the rollout of the first batch of vaccines on Sunday at 5pm.

I personally could care less what the “church ” has to say.