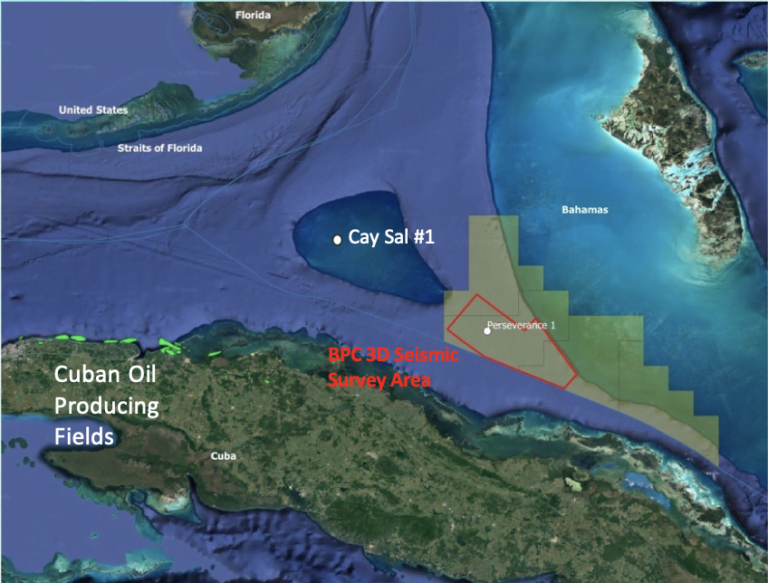 BPC: "Perseverance #1 — a potentially transformational exploration well." The well is 90 miles from Andros, and approximately 270 miles from Nassau.

Letter: Bahamian govt will require financial assistance from the US to address any oil spill

NASSAU, BAHAMAS — Some 17 members of the United States Congress have urged the government to reconsider its agreement with the Bahamas Petroleum Company (BPC) for exploratory oil drilling in The Bahamas and questioned the company’s and the government’s capacity to mitigate a serious disaster.

The letter, dated December 17, noted that should such a “calamitous event” occur, the government would “undoubtedly require financial assistance from neighbors, including the United States”.

“Should BPC’s project move forward, we will be justified in fearing that the Atlantic coast is at risk of severe, even catastrophic, impact from any spills that might occur — essentially undermining the recent offshore drilling ban extension from President Trump, and future offshore drilling restrictions,” it read.

“It is unclear whether BPC has the capacity to help mitigate a serious disaster, let alone prevent one in the first place.”

The letter further noted that the ship set to begin oil drilling in The Bahamas has a “record of safety issues” on previous jobs, including incidents in March 2016, September 2016 and October 2017.

The Stena IceMAX drillship has arrived in The Bahamas — docked just off of Bimini — and is set to begin drilling the Perseverance #1 oil well west of Andros.

“Unfortunately, we believe the agreement reached between BPC and the Bahamian government is directly contrary to the urgent call made at the United Nations just last year,” the letter continued.

“In that speech, prime minister, you cited the contribution carbon emissions have made to the climate crisis and the devastating impacts this crisis continues to have on island nations like The Bahamas, including those wrought by Hurricane Dorian, rising sea levels and natural barrier degradation.

“These events are felt deeply by Americans and communities around the world, and expanding offshore drilling is fundamentally against their interests.”

Prime Minister Dr Hubert Minnis has said it is not his dream to drill for oil in the territorial waters of The Bahamas, insisting he remains “totally against” oil drilling in Bahamian waters.

On Wednesday, while address oil drilling in Parliament, Minister of Immigration Elsworth Johnson said when he served in the Office of the Attorney General he “did every contortion” to try to legally get out of the agreement with BPC.

“When we discussed it with the legal department, we were advised that the commitment and everything was signed and basically we could not get out of it,” he said.

The agreement, however, has never been made public.

It was also sent to US Secretary of State Mike Pompeo and US Charge d’Affaires Stephanie Bowers.

Environmental groups Waterkeeper Bahamas Limited and Coalition to Protect Clifton Bay have filed a legal action seeking a judicial review of the matter and an injunction against BPC’s plan to drill for a test well.

So the US can drill and exploit the Gulf of Mexico, but The Bahamas (who’s economy is thoroughly struggling) cannot even find out if they have multi billion dollar resources in their borders???

Is the US going to gift the $5+ billion revenue potential the Bahamas could use to rebuild their economy?

Lest we forget good ole Uncle Sam has been the world’s biggest polluter for decades and currently produces more barrels of oil per capita than any other country. Remember Canute?

I guess it’s a lot easier to be an environmentalist when your a hedge fund billionaire living in the Bahamas tax haven.

Here’s hoping you strike it big and can financially decouple from these jokers.

The oilfields are connected under the sea, they are slurfing the bahamian oil on the US side LOL

The Bahamian government can’t help its own people recover from hurricane Dorian. How will the manage a catastrophic oil spill. They won’t, they have no money. They will potentially destroy the only reason anyone visits the Country by damaging their ecosystem. We hypocrites spend our dollars while enjoying the natural beauty of the Bahamas and the pristine waters found their. Do I need to mention the reality of the future of oil . Educate yourself then look to the big picture for the country. Read about how well oil is working for Venezuela.

Look at how well Norway has done w oil. Venezuela and Nigeria aren’t the only examples. I’m a citizen on both sides of the Gulf Stream and I don’t trust either of my governments to drill without incident. It is the nature of extraction. But let’s see what happens w US energy policy, or US – Bahamian relations over the coming years.