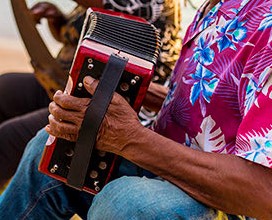 Ferguson: Professional Bahamian entertainers have made recommendations to govt but received no response

NASSAU, BAHAMAS — The Bahamas has not quite realized the value of the orange economy despite the relatively large pool of skilled artists and artisans, according to noted Bahamian musician and producer Fred Ferguson.

Ferguson asserted that while the government has allocated financial resources for Junkanoo, its plans for the local entertainment industry remain unknown.

While addressing the inaugural Cat Island Business Outlook held recently, Ferguson noted the creative economy, or orange economy, holds great potential for positive economic growth in The Bahamas. He also noted that he and other cultural professionals have given recommendations to the government on ways to enhance and promote the Bahamian entertainment industry as part of a government economic recovery sub-committee, however, nothing has materialized to date.

“We need to elect leaders that understand the importance of culture and entertainment to the survival of our tourism product and the well-being of our nation as a whole,” said Ferguson.

“We need to give real meaning to the Ministry of Culture and stop thinking that only [Junkanoo] is our culture. Appointed ministers of culture seem to only have to be connected to Junkanoo or sports and the plans change every five years.”

Ferguson suggested that the Ministry of Culture be a standalone ministry and that if it is attached to another ministry, that ministry should be tourism.

“Barbados has been successful in establishing an autonomous National Cultural Foundation whose focus is to develop artists through sponsored community programs led by professionals. This idea was recommended to [our] government to no avail,” said Ferguson.

“A school of the arts to train professionals is urgently needed. We don’t suffer from a lack of talent but lack of training.

“Local entertainers should be offered the same exemptions afforded to hotels under the Hotels Encouragement Act. Funding should be made available for persons looking to invest in the entertainment industry.

“Artists need protection through copyright laws that need to be improved. Our royalty payments are getting smaller and smaller every year.”