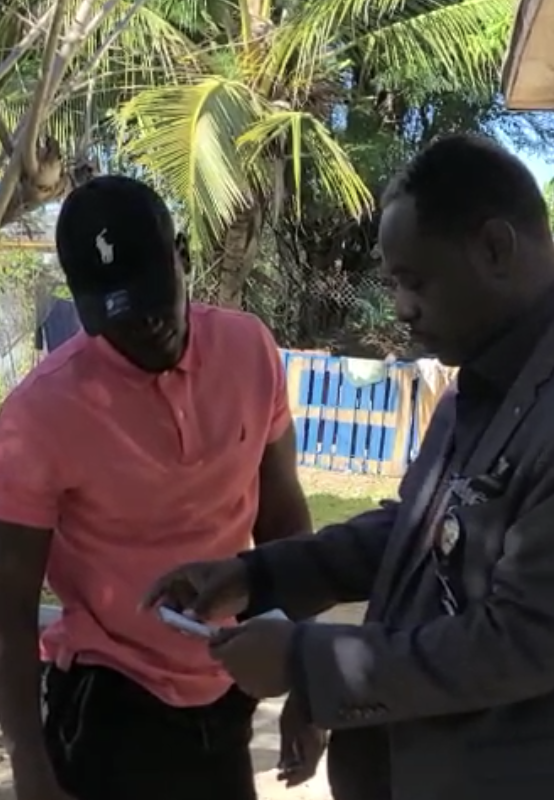 Coalition of Independents leader Lincoln Bain questions a migrant about his legal status in the country in a video.

NASSAU, BAHAMAS — The Ministry of Foreign Affairs yesterday advised that only law enforcement officials were authorized to question or detain any individual in The Bahamas.

In a statement, the ministry referred to a video circulating of a fringe activist group interfering with the free movement of a member of the public.

While it did not name the group, a video depicting Coalition of Independents leader Lincoln Bain questioning a man about his status while reviewing his passport and work permit was circulated over the weekend.

In the video, Bain can be seen questioning a man about when he entered the country, the date of his work permit, and the name of his work.

Bain and his group have been agitating for the government to take immediate action on what they have deemed an immigration crisis by adopting its recommendations, including draft legislation.

The group protested outside the Office of the Prime Minister last week in an attempt to deliver a list of suggestions to the prime minister. Bain said the Davis-led administration had 14 days to implement the changes or his group would take further action.

“The grouping has no lawful authority to interfere with members of the public,” read the Foreign Affairs statement.

“For public information, no citizen of this country or non-national should stop or surrender or allow themselves to be questioned or detained by any person, unless the person so doing has identified him or herself as a duly authorized law enforcement officer.”

The statement continued: “The Bahamas remains a country governed by the rule of law and the rights of all must be respected. If you have been subjected to the unlawful actions of this group, you may make a report at the nearest police station, your local embassy, or to the Ministry of Foreign Affairs.”

It added: “We are circulating this advisory to all foreign embassies in The Bahamas.”