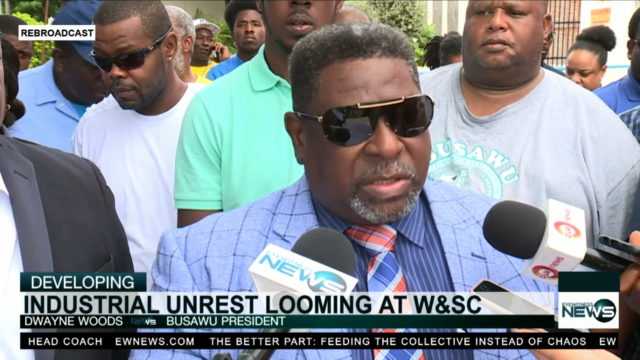 Irate members of the Bahamas Utilities Services and Allied Workers Union (BUSAWU) protested outside of Water and Sewerage Corporation (W&SC) headquarters yesterday, demanding that three employees who were terminated on Wednesday, be reinstated.

The three men in question, were charged with stealing a fire hydrant, however, those charges have since been dropped.

Union President Dwayne Woods said that the union is disappointed that Kerven Pierre, Lajaith Paul and Latario Bowe, were reinstated then immediately fired – for what he said he believes is all in an effort to “minimize and nullify” the influence of the union.

According to reports, the trio was formally charged in the Magistrates court on May 15 this year, with stealing by reason of employment. On the same day, however, the charges were dropped.

Woods said that according to the industrial agreement between the union and WS&C,  the employees should have been allowed to return to work. He noted that the matter was also said to be on the desk of Prime Minister Dr. Hubert Minnis for intervention.

“The prime minister told us that the men would be reinstated when the House of Assembly took their recess, so it was a work in progress… management went ahead and did what they wanted,” Woods claimed.

Woods said that the employees were reinstated on July 9, however, on Wednesday, July 11, the three employees received termination letters, which he insisted contradicts  Article 34.03 of the industrial agreement

“The union is appealing to the government for the removal of the executive chairman and general manager, with immediate effect based on this decision,” he said.

Woods added that while the union would like for stakeholders to resolve this matter amicably, it is not opposed to industrial action.

The union is backed by National Congress of Trade Union Bahamas (NCTUB) President Bernard Evans, who said, the action taken by executives is unacceptable.