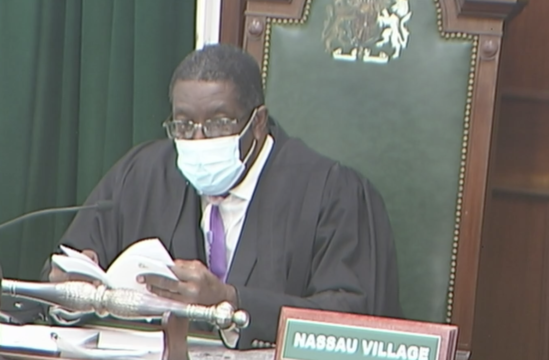 NASSAU, BAHAMAS — Interrupting an exchange between Bamboo Town MP Renward Wells and Opposition Leader Philip Brave Davis on the rules of Parliament, Speaker of the House of Assembly Halson Moultrie announced yesterday the rules will be interpreted to end the practice of successive governments refusing to be answerable to the Bahamian people about the expenditure of their money.

He said: “This practice of refusing to be answerable to the Bahamian people on the expenditure of the taxpayers’ money must come to an end.”

Moultrie, who hinted last week that the government was in for a surprise, said in future parliamentary proceedings, members will be allowed to ask and answer questions, including the questions left unanswered by the previous administration.

He also said as speaker, he will from time to time ask questions based on the audit reports referred to the Public Accounts Committee (PAC).

He insisted the executive will no longer be able to “circumvent” Parliament’s oversight function and the government’s constitutional obligation to taxpayers.

“This Parliament has an oversight responsibility,” Moultrie said.

“Recently, the chair made a ruling with respect to the Public Accounts Committee (PAC) which would strengthen the Parliament’s oversight, [in] particular of executive action.

“Now, I had not intended to make any communication today, but this matter that has arisen provides the opportunity for the House to appreciate fully its role as an oversight body of executive action.

“Now, the government of the day has the opportunity to bring before this Parliament information to which questions were not answered during the previous session of this Parliament.”

In his first act as an independent speaker following his resignation from the Free National Movement (FNM), Moultrie overturned a 2015 ruling of the former speaker, returning wide-ranging powers to the PAC.

Yesterday, the speaker deemed the practice of the majority using the agenda and order of business in Parliament as a “loophole” to circumvent answering questions as “unconstitutional”.

Rule 39(2) of the House rules details the order of business when the House meets on the second Wednesday of the month, when members can ask questions of the government.

“I am putting this Parliament on notice that moving forward, these rules will be interpreted to strengthen democracy and to give the Parliament its constitutional oversight function,” Moultrie said.

“In other words, there should be no rule that can circumvent the constitutional oversight function of the Parliament.

“So, I’m giving notice that the rules will be interpreted in such a way that members will be given the opportunity to ask questions and answer questions.

“The chair will, in [the] exercise of its jurisdiction on occasion, ask and put questions to both ministers as well as those who may have been in the previous session, particularly with respect to all of the audited reports that I have tabled and referred to the Public Accounts Committee.”