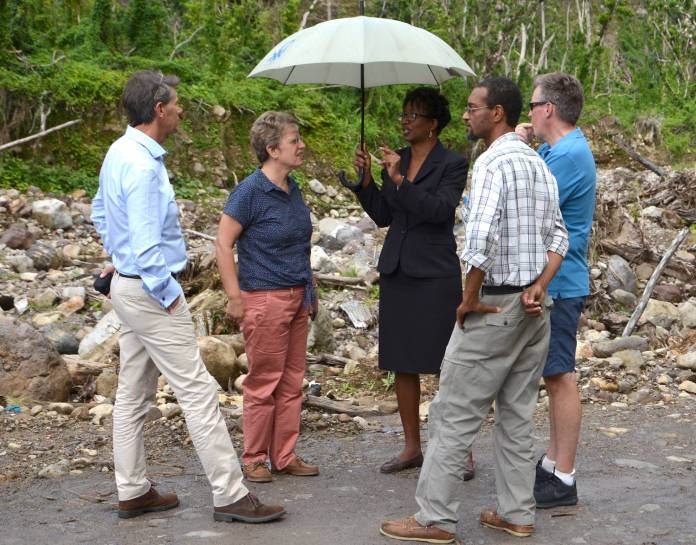 British High Commissioner to Barbados and the Eastern Caribbean, Janet Douglas, visited areas around Pichelin and Geneva in Dominica, which will benefit from UK funded improvements to the roads and water systems. From right, she was accompanied by DFID Humanitarian Adviser, Ian Purves; Permanent Secretary in the Ministry of Public Works and Ports, Denise Charles, Deputy High Commissioner, Craig Fulton and the Ministry’s Chief Technical Officer, Mr Johnson. (PHOTO: CARIBBEANNEWSNOW.COM)

ROSEAU, Dominica — Following the devastation caused by Hurricanes Irma and Maria in September 2017, the UK government said it remains committed to helping Caribbean islands to build back better.

To date, the British government has provided £185 million (US$258 million) in aid to Caribbean, Commonwealth partner countries and UK Overseas Territories. This includes £35 million in aid to hard-hit Dominica and Antigua and Barbuda, which has provided the islands’ communities with immediate humanitarian assistance, food, water, emergency shelter, roofing materials, timber, hygiene kits and seeds, and fertiliser. The UK will also make £8 million available to promote hurricane and disaster resilience across the region and in individual countries.

During a recent visit to Dominica, British high commissioner to Barbados and the Eastern Caribbean, Janet Douglas, visited areas around Pichelin and Geneva that will benefit from planned, UK-funded improvements to water systems and roads.

Douglas said, “The impact Hurricane Maria had on the Eastern Caribbean was devastating. I am proud that the UK is providing vital support to help the region’s ongoing recovery. Hurricanes Irma and Maria illustrated the challenges small Caribbean islands face and the importance of helping these countries find robust and sustainable ways to combat such threats.”

Through the UK Caribbean Infrastructure Fund (UKCIF), the UK is additionally investing over £300 million in infrastructure across the Caribbean islands of Antigua and Barbuda, St Lucia, St Vincent and the Grenadines and Jamaica to help increase resilience to natural disasters and the effects of climate change. This funding is entirely grant-based and is delivered in partnership with the Caribbean Development Bank (CDB).

This additional funding will play a vital role in laying the foundations for growth and prosperity, reduce poverty and create jobs and opportunities for the people of the Caribbean. All of which have been earmarked as high priority areas in the run up to the upcoming Commonwealth Heads of Government Meeting (CHOGM), which will take place in London in April 2018.

In preparation for the 2018 transatlantic hurricane season, RFA Mounts Bay is currently embarking on a wider regional mandate, to lend further support to recovering UK Overseas Territories and independent countries. The ship’s captain, David Buck, met with the executive director of the Caribbean Disaster Emergency Management Agency (CDEMA) during his most recent visit to Bridgetown, reaffirming the commitment of both parties to be better placed to handle possible disasters this year. The ship also visited Antigua and Barbuda while in the region, reiterating that the British Navy vessel continues to be on short notice, to react to any emerging crises around the Caribbean.