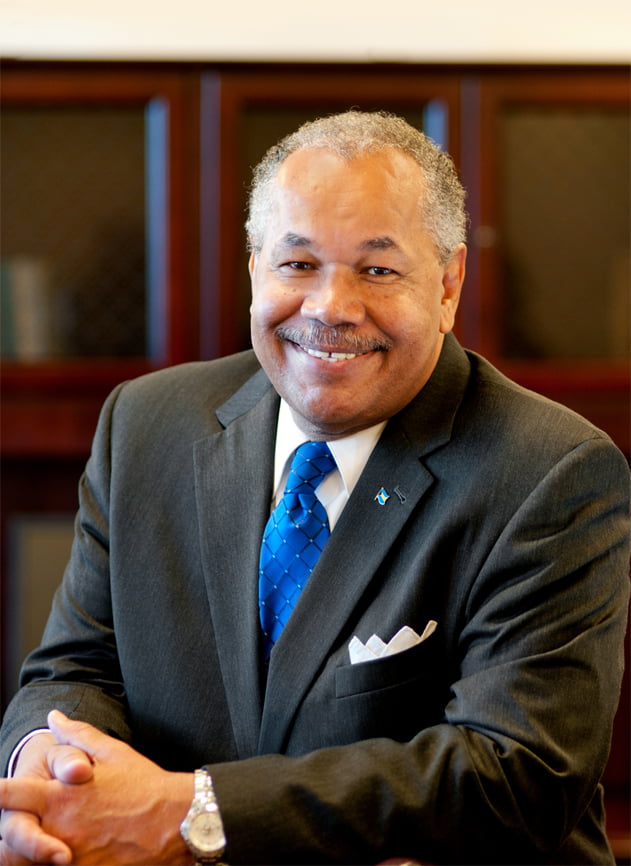 President of The University of The Bahamas (UB) Dr Rodney Smith.

NASSAU, BAHAMAS – President of the University of the Bahamas Dr Rodney Smith has been shortlisted along with two other finalists to be West Virginia State University’s (WVSU) 12th president.

The university posted on its website last week that Smith, along with the other two candidates – Dr Patricia Ramsey and Dr Nicole Pride – are expected to participate in a meet and greet on the U.S. campus this week, with Smith appearing on Wednesday.

The “Meet the Finalists” event will allow WVSU’s faculty, staff, and students to learn more about each candidate in an open forum.

The event is scheduled two days after UB’s virtual commencement exercise, which is being held today.

In an interview with Eyewitness News yesterday, Union of Tertiary Educators of The Bahamas (UTEB) President Daniel Thompson said the faculty was not made aware of Smith’s possible pending departure prior to seeing the WVSU notice on Friday.

“We consider president Smith as having left the university as a result of what he has done,” Thompson said.

“Whether he is successful or not winning the presidency of the American university, his effectivity has been eroded as leader of a national institution.”

The UTEB president offered Smith best wishes “as he proceeds to his career”.

“At his level of CEO, once he has applied and in particular, he has reached the shortlist he would have taken a calculated decision to move on,” Thompson continued.

“The implications from his non-removal from UB’s president include loss of confidence by staff, faculty, students, and the three representative unions.

“He will effectively become a laying duck leader, and what he has done is an abandonment of duty during a pandemic.

“This institution, this country is faced with one of the worse situations post-Dorian and the COVID-19 pandemic, and he chooses to look for greener pastures and we wish him the best.”

Smith, whose tenure at The University of The Bahamas has been controversial, was granted a new five-year contract in 2017, which would expire in 2022.

He previously served as president of the tertiary education in 2004, but soon after his start, he was embroiled in a plagiarism scandal and resigned in 2005.

It remains unclear whether the university is aware of Smith’s interest or whether a search for a new UB president is underway.

Thompson said UTEB, along with the Bahamas Public Service Union (BPSU) and the Public Managers Union met with Smith several weeks ago and recommended that he not bring in a new executive vice president.

He revealed that the university had tapped Dr Sarim N. Al-Zubaidy of the University of Trinidad and Tobago (UTT), as the new executive vice president of UB.

He said the union has significant concerns that Al-Zubaidy will be allowed to come in as an acting president given the new revelations about Smith.

Thompson insisted that UB has a deep bench of seven to 10 professionals who have formerly served at international and national institutions who can serve as executive vice president or president until a search is conducted to have a replacement for Dr. Smith.

“Even more now it is critical that Dr Al-Zubaidy does not come into this country because he was not vetted to be the president and if he comes as the executive vice president he will be the de facto president.”

He added that it would be disingenuous of the UB Board of Trustee to move forward with the hiring of the Iraqi educator.

“Should they insist on bringing him in, the foreign executive vice president, that university will close down because we are not going to accept or tolerate that,” Thompson added.

Always a headline ahead, around the world, Bahamas, ewnews, Eyewitness News, University of The Bahamas