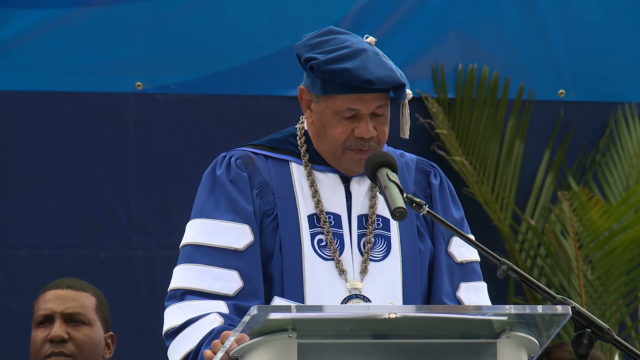 NASSAU, BAHAMAS – Despite Prime Minister Dr. Hubert Minnis stating in his most recent national address that the government would offer free tertiary education at the University of The Bahamas, UB officials have stated otherwise.

“The University has been working very, very closely with the government over the past several months with regards to the tuition grant initiative and these increases were calculated into all of those figures as well,” said UB’s president Dr. Rodney D. Smith at a press conference Thursday.

“These [fee increases] are applicable only to new students coming in the Fall and we have not had conversations with new students. We are still going through an admissions process.”

Earlier this week, UB released a letter announcing that as of this Fall 2019, there will be a 15 percent increase in tuition for all first-time, first-year students.

When asked about the disparity between the increase in fees and the government’s free tuition offer, Dr. Smith said one has nothing to do with the other.

“I really can’t comment about the government’s proposal. I would have to leave that to the government to make those comments, “Dr. Smith said.

According to UB officials, the former council of the College of the Bahamas approved tuition rate increases in the amount of 20% for Fall 2017, 15% For fall 2018 and 12% for Fall 2019, but it was never implemented.

The Union of Tertiary Educators of the Bahamas (UTEB) also expressed that they were not a part of the decision making to increase fees, but Dr. Smith noted yesterday that UB has a board of trustees and the board does not have to consult with the union in making its decisions.

Meanwhile, Tanya Cash, a UB parent, said her child has been attending UB for the past three years and after listening to the president’s press conference on Thursday, she feels as if she has been deceived.

“The fees for UB just went up, I think, late last year or early last year where my son was on the bursary scholarship with the Ministry of Education. They were giving him about $2,500 but ever since the fees increased he had to pay almost double,” Cash claimed.

“I have the proof here that they [fees] did go up.

Opposition leader Phillip Brave Davis also called on the government for clarity as to whether or not tuition at the UB is actually free.