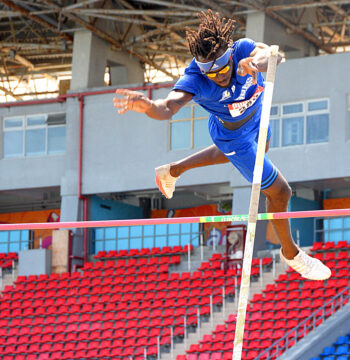 University of The Bahamas (UB) Mingoes multi-event specialist Kendrick Thompson competes in the pole vault segment of the open men’s decathlon event at the BAAA’s Easter Classic on Sunday, April 4, 2021 at the Thomas A Robinson National Stadium. (UB ATHLETICS)

NASSAU, BAHAMAS — The University of The Bahamas (UB) Mingoes multi-event specialist Kendrick Thompson shattered the national record in the open men’s decathlon at the BAAA Easter Classic over the weekend at The Thomas A Robinson National Stadium.

“I felt good over the two days, especially with all those PR’s,” Thompson said. “I didn’t quite get to 8,000 points but it shows me that I can get there as I’m constantly improving.”

Head Coach Ednal Rolle was excited by the performance as well.

“This shows we have a great multi-event program along with an overall great programme,” he said. “It shows we have a broad range of coaches that help to develop all of our athletes and we are excited to continue to grow this program here at UB.”

The Mingoes also had strong performances on the track at the meet overall.

“I tried something new with my 400m with going stronger in the second half of the race but I wasn’t able to pick up speed fast enough at the 200m mark,” she said. “It cost me in the long run so I’m going to have to go back to the drawing board.”

“The plan in the 400m was to get out fast and come home with everything I could,” he said. “The meet wasn’t as successful as I wanted, especially with the weather not being ideal.”