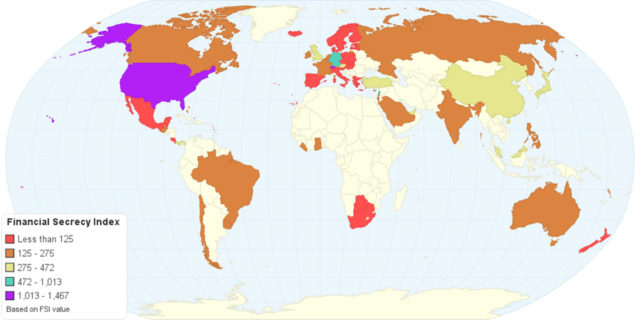 GEORGE TOWN, Cayman Islands (CNS) — The United States has pushed the Cayman Islands into third place in the global financial secrecy charts from the Tax Justice Network. The U.S. is now listed as the second largest tax haven in the world, behind Switzerland.

The TJN’s 2018 Financial Secrecy Index (FSI), produced in partnership with Transparency International and the Financial Accountability and Corporate Transparency (FACT) Coalition, launched the report in Washington on Tuesday, when Gary Kalman, the executive director of FACT, said the U.S. ranking and lack of leadership was enabling the global tax haven industry.

The authors of the report continue to campaign against secrecy in global finance because they say it facilitates financial crime, money laundering, corruption and tax evasion.

“Jurisdictions who fail to contain it deny citizens elsewhere their human rights and exacerbate global inequality,” the TJN said in a release.

Analyzing each of the countries on its list in the 2018 report, the TJN acknowledged in its assessment of the Cayman Islands that there had been some changes and said that the jurisdiction had responded in a mixed fashion to the global initiatives that have emerged to tackle the problem of international financial secrecy.

The Cayman Islands remains in the top three, the TJN said, because of the scale of onshore operations and the persistent levels of secrecy. But the report acknowledged that Cayman was one of “relatively few classic tax havens to opt for the ‘automatic information exchange’ in Europe”, though the TJN criticised that deal as “very narrowly focused and full of loopholes” that had hardly impacted offshore business here.

The country report also gave credit to Cayman for being one of the first countries to sign on for the common reporting standard, which will begin to take effect here this year, acknowledged the repeal and replacement of the Confidential Relationships (Preservation) Law.

However, it still criticised the jurisdiction and even noted the drama surrounding local newspaper editor David Legge fleeing from Cayman in June 2015 after Premier Alden McLaughlin accused him of treason over an editorial about petty local corruption.

The TJN remains a staunch critic of Cayman and other financial offshore centres, but this particular report and its surrounding messages are firmly aimed at the US. For many years the Cayman Islands has pointed to America as a jurisdiction with far less regulation and controls that this jurisdiction, and now it seems the TJN and Cayman at least agree on one thing.