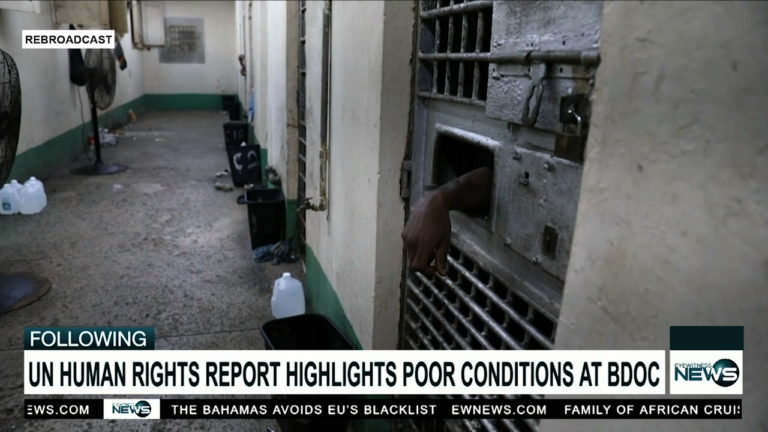 NASSAU, BAHAMAS – The United States has highlighted a series of shortcomings in The Bahamas’ immigration and detention process as well as its legal framework, and said while there have been efforts to improve procedure as it relates to migrants, gaps remain as it relates to the treatment, conditions and imprisonment of people in this country.

The U.S. Department of State’s 2018 Human Rights Report, released yesterday, pointed out that while the constitution prohibits torture and cruel, inhumane, or degrading treatment or punishment, at times citizens and visitors alleged instances of “cruel or degrading treatment of criminal suspects or of migrants by police or immigration officials”.

“In June a man alleged [that] Bahamas Department of Corrections’ officers beat him and denied him medical treatment.

“He was awaiting the decision of a disciplinary tribunal.

“For example, in September a prisoner reported that BDOC officials touched him in a sexually inappropriate manner on the shoulders and chest.

“The government moved the individual to a different wing of the prison while awaiting the results of an internal investigation.”

The report noted that conditions at the sole detention facility in Fox Hill failed to meet international standards in some areas and were “harsh due to overcrowding, poor nutrition, and inadequate sanitation and ventilation”.

According to the report, there were 1,778 inmates at the prison facility as of September 2018.

“Pretrial detainee juveniles were held with adults at the Fox Hill remand centre,” the report read.

The human rights report said the government advised that inmates consistently received three meals a day, but inmates and non-governmental organizations reported innates only received two meals per day and sometimes that meal consisted of bread and tea.

It said fresh fruit and vegetables were rate to non-existent; prisoners reported infrequent access to drinking water and an inability to save potable water due to a lack of storage containers; cells lacks running water; and those in cells removed human waste by buckets.

The report also noted that an independent authority does not exist to investigate credible allegations of inhuman conditions, and said migrant detainees did not have access to an Ombudsman or other means of submitting uncensored complaints, except through their nation’s embassy or consulate.

An Ombudsman Bill was established in October 2017.

However, the government has yet to debate the proposed legislation or pass the bill in Parliament.

According to the bill, the ombudsman would have the power to enter any government department or division to inspect the premises and conduct interviews or examine any document relevant to the complaint, except in some special circumstances.

According to the US government, Bahamian law does not provide protection for asylum seekers and the government has not established a system for providing protection to refugees, though it has worked to develop a formal procedure to enhance the process.

It said access to asylum remains informal, with no normative legal framework under which the legal protections and practical safeguards could be implemented.

“The lack of refugee legislation or a formal policy complicated UNHCR’s work to identify and assist asylum seekers and refugees,” the report read.

It said while the government advised that trained personnel screen applicants and referred them to the Department of Immigration and Ministry of Foreign Affairs for further review, authorities did not systematically involve UNHCR in these proceedings, albeit the Bahamian government sought advice on specific cases.