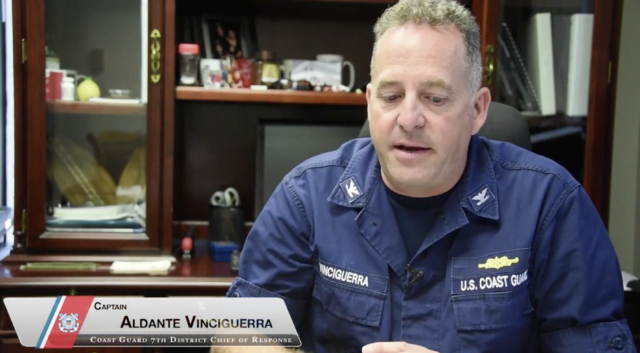 Releasing video footage of a recent illegal entry attempt of nearly 200 Haitian migrants to underscore the dangers associated with human smuggling and trafficking, the United States Coast Guard is seeking to discourage migrants from making the treacherous and illegal journey on unseaworthy vessels from Haiti to The Bahamas and the United States.

On board the 45-foot wooden freighter were 177 Haitian migrants on board, including seven minors.

The nationality of the suspected smugglers was not released.

In the footage released by the U.S. Coast Guard last Friday, which begins with a message: “Don’t take to the sea illegally”, dozens of migrants on board a crammed wooden sloop are tossed into the water as the vessel wildly sways on the open sea.

More migrants, thrashing in the water in an attempt to get back into the vessel, can be seen clawing into awaiting dinghys operated by U.S. authorities.

Other scenes show migrants sprawled out, barely conscious on the deck of a U.S. vessel, being aided with resuscitation masks.

Narrating the just under two minute recording, Captain Aldante Vinciguerra, U.S. Coast Guard 7thDistrict Chief of Response, says, “The risk is not worth the gain when you’re taking to the sea. The sea is an unforgiving environment and often the vessels that these individuals are transiting on are not seaworthy, and that is a very dangerous combination, which can very easily end in disaster.”

He continues, “Weather, especially in our area can go from flat calm to extremely high seas very quickly, and without the proper safety equipment, communications gears and knowhow of being a sailor, you are putting a lot of people at risk.”

According to the U.S. Coast Guard, more than 30 deaths were reported since March 2019 as a result of illegal entry attempts.

“We’ve had people killed this year; numerous people on accidents in both the Bahamas and in the Florida straight where vessels sunk; vessels ran aground and multiple deaths resulted from those incidents

“Again, taking to see is definitely not the answer because that is probably one of the most dangerous ways to get into the United States, so our job is to keep that from happening.”

In early February, at least 31 Haitian victims drowned near Man-O-War Cay, off Abaco, after their vessel ran aground and capsized.

According to officials, 83 people were on board, leaving 34 unaccounted for.

Vinciguerra said U.S. authorities have observed an uptick in illegal entry attempts into the U.S. this year and in response has increased its resources in conjunction with its partners.