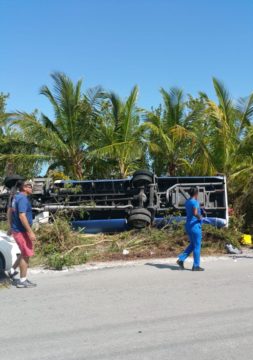 ELEUTHERA, BAHAMAS – Minister of Health Dr. Duane Sands on Tuesday confirmed that two of the six seriously injured persons involved in the Eleuthera Adventures bus accident in South Eleuthera on Monday are now listed in stable condition and are expected to be released from hospital soon.

Dr. Sands told reporters outside of Cabinet office Tuesday morning that two patients are at the Princess Margaret Hospital and Doctors Hospital.

He confirmed that both patients are receiving treatment and the remaining four of the six injured persons are being attended to by medical personnel in South Florida.

Eyewitness News Online was on the ground just hours after the accident unfolded on Monday.

Among the first responders who gave their account of the harrowing experience was Hank Johnson, Member of Parliament for Central and South Eleuthera.

“It was quite an experience Monday morning; but the medical team here on the island really performed with such excellence of which I am proud of,” he said.

“The nursing team led by Registered Nurse Freda Cooper; attended to those injured passengers with swiftness and accuracy and I must tip my hat to all of them on a job well done.

Recounting her experience as the woman in control of Monday’s operations on the ground; she admitted that it was an experience that won’t soon be forgotten.

She confirmed that she received the distress call at 10:29 a.m. on Monday.

“I knew what I had to do. I knew the time that I wanted it done and the time that it had to have been done and so everything just came into play as it should,” she said.

Meanwhile, on the ground in South Eleuthera, nurse Cooper confirmed that medical professionals stepped up to the plate.

“I could not believe that it was happening; but, at this moment I have no regrets. The entire Eleuthera team, the medical team, health care providers and even the volunteers; their timing was just awesome,” Cooper recalled.

One of the first responders at the scene was 30-year veteran nurse Debbie Deal.

“Whenever and wherever a need arises I am always ready to go on the scene with my bags packed and ready to go,” she said.

“My first response was that, emotionally, I felt sorry for them and I really just wanted to render my assistance to them.

Nurse Deal shared that she was elated to be able to provide top notch medical care alongside U.S. Coast Guard officials who descended on the island to help as well.

Nurse Deal is no stranger to working with them.

“I flew with the U.S. Coast Guard in 2013 and the incident on Monday just brought back those memories for me; I just wanted to help and get the job done.”

Sources on the ground told Eyewitness News Online that a number of the critically injured could possibly be paralyzed for life.

Owners of Eleuthera Adventure Tours declined comment on Tuesday morning, however the tour operators could possibly find themselves having to answer to legal issues in the near future.

In the wake of the accident, there have been persons who have questioned if the major traffic accident could negatively impact the tour industry on Eleuthera.

One tour operator, Stanton Cooper, asserted that the “isolated incident will not affect the industry,” for tour operators on the island.

“That was a private company and so it won’t have any effects on us,” he opined.

“I guess they will now look into seeing that these private tour vehicles are better maintained; but, no I do not see this affecting our livelihood.”

Meanwhile, Minister of Tourism Dionisio D’Aguilar told the media before heading to Tuesday’s Cabinet meeting that he was thankful that there were no injuries after Monday’s accident.

“It was a horrible situation, but I think we emerged relatively unscathed,” D’Aguilar said, adding that he does expect Monday’s accident to put a “blemish” or a “black mark” on the country’s tourism industry.

“It was an accident. It could have happened anytime, anywhere to anyone. Thankfully there were no fatalities. I think we got our air assets in place very, very quickly and people were very expeditiously moved on to a destination where they could receive first class healthcare, so it was very fortuitous that the Americans had assets nearby or we could have mobilized our own to get them [passengers] either to Nassau or to South Florida to receive healthcare, and that was very impressive.”