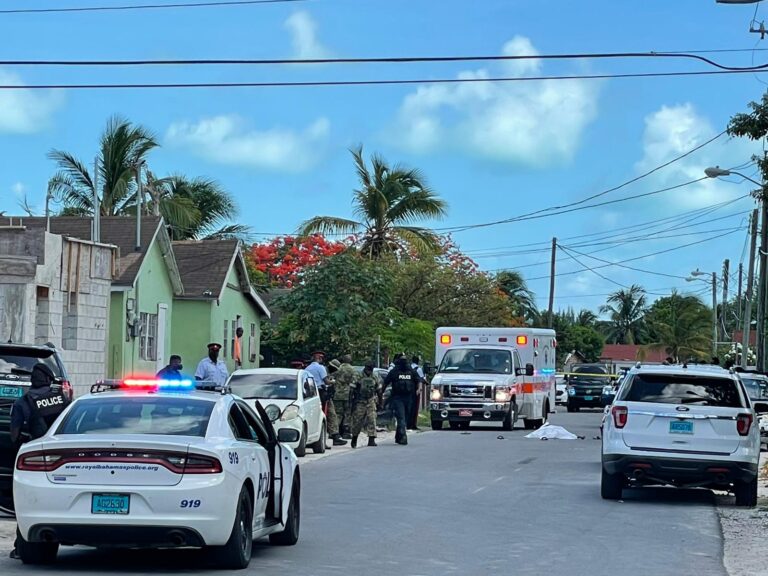 It was one of two fatal shootings on New Providence, though it was unclear if the incidents were connected.

According to police, officers responding to reports of gunshots on Peardale Road shortly before 4pm found a man lying in the road.

A woman was transported to the hospital with injuries.

When Eyewitness News arrived on the scene, the man’s body was lying on the ground covered with a tarp.

Assistant Superintendent Audley Peters indicated the occupant of a vehicle that drove alongside the victim opened fire.

Relatives identified the victim was as Christopher Humes Jr, 28.

His father, Christopher Humes Sr, sobbed as he called on the men responsible to turn themselves in.

“Whoever killed my son, I hope you are out there feeling good,” he said.

“God be with y’all, you know. God be with ya’ll ‘bey’, because if I was ya’ll I’d turned myself in because y’all kill an innocent man.”

Humes said his son recently found employment on Rose Island and the pair had spoken recently.

He said he received a call from his daughter about his son’s murder shortly after returning home from work and was paralyzed with shock.

Humes said his son had just stepped out of the barbershop when he was shot dead.

Several men were arrested on the scene for questioning in connection with the shooting.

A man who was patronizing a bar nearby when the shooting took place said he heard more than a dozen gunshots, prompting him to hide behind a refrigerator to avoid the barrage of bullets.

The man, who did not wish to be named, said police were quick to respond.

He said the area is known for incidents of theft and other petty crimes, but the murder came as a surprise.

“Not like murders; a lot of stealing going on, but this one comes as a surprise,” he told Eyewitness News.

Asked what led to the shooting, the man said there was no altercation that he observed.

Police did not say whether the shooting was connected to the murder of another man just hours later.

According to police, a light-colored, mid-sized vehicle drove alongside a man and women who were at a residence on First Street, Coconut Grove, and shot them.

The victims were transported to the hospital, where the man succumbed to his injuries.

At last report, the woman was in serious but stable condition.