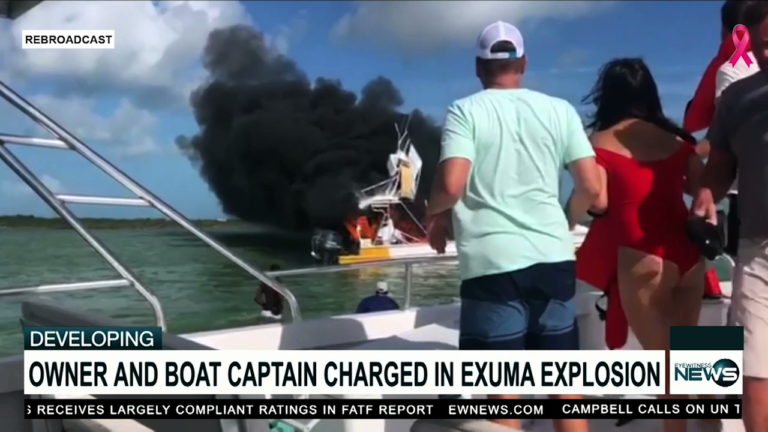 Two men were arraigned in the Magistrate’s court today in connection with an Exuma boating excursion that turned deadly back in June.

Clayton Smith, 45, seen in the dark blue and white striped shirt, and 36-year-old Roderick Watson, both of Exuma appeared before Chief Magistrate Subusola Swain charged with one count of manslaughter by negligence and nine counts of causing negligent harm.

On the day in question, police say a Four C’s Adventure boat was travelling through the Exuma Cays with 10 tourists and two Bahamian crew members when the boat’s engine reportedly exploded. Mrs Jackson, who was celebrating her 15th wedding anniversary died on the scene.

The other nine passengers were airlifted to different hospitals with varying injuries ranging from amputated limbs to concussions.

Earlier this month, a report released by the Bahamas Maritime Authority (BMA) found that the 38-foot vessel involved in the explosion was not registered with the Port Department and had never been inspected.

The report also revealed that the vessel was not designed or constructed to meet any international standards, and was made by the owner using no technical drawings.

It was also found that the fuel fill and vent hose of the vessel did not meet the required specification for its intended purpose.

The report outlined that although the exact cause of the fire had not been determined, a spark generated from the electrical circuit resulting from inadequate and failed or failed isolation material was considered the most probable cause of the explosion.

Smith, the owner of Four C’s Adventures and Watson, the captain of the boat, were denied bail and remanded to the Bahamas Department of Corrections (BDOC) until December 12, when they will return to court for service of a Voluntary Bill of Indictment (VBI).