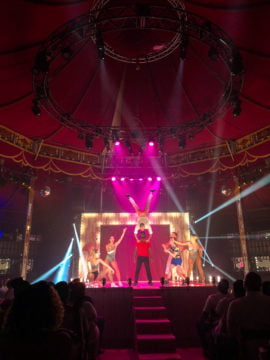 The Twilight Electric Festival and Showtime at the Pink Flamingo is held every Wednesday through Sunday until June 23, 2019 at the Atlantis Resort. (PHOTO: ATLANTIS)

NASSAU, BAHAMAS – It’s been here now for the past three weeks, and if you’ve not experienced the Twilight Electric Festival and the Showtime at the Pink Flamingo show at the Atlantis Resort, then you’re truly missing out.

There’s really no need to visit Las Vegas, when you can get far better entertainment in The Bahamas with a cabaret-style show that is coupled with Cirque-du-Soliel circus entertainment, simply by visiting the Atlantis Resort.

The Twilight Electric Festival is an entertainment and arts festival that offers guests and locals the opportunity to get their fill of a variety of palate-pleasing food and drinks at Paradise Harbour.

The area has been transformed to house a number of stalls, such as McKenzie’s conch salad, Ben & Jerry’s ice cream, a Village Burger Shack, fresh lemonade, popcorn and caramel corn, snow cones, cotton candy and an assortment of drinks.

But that’s not all.

There is also live band entertainment interspersed with Bahamian acts, a small artisan market that features handmade straw items; and if you’re daring and not afraid of heights, you can hop on the huge Ferris Wheel and take in a full view of Nassau Harbour and the scenic Atlantis Resort.

At 8:00 p.m., persons attending the Twilight Electric Festival can head into the brightly-lit two-story Spiegeltent – the biggest of its kind in the world –  to take in the captivating Showtime at the Pink Flamingo show.

The show is a breathtaking cabaret-style theatrical production, which ignites a belly full of laughs coupled with gasps and nail biting moments.

And as Showtime at the Pink Flamingo ends and persons leave the spiegeltent feeling completely awed, they are further entertained before leaving the festival area with the ultimate cultural celebration: Junkanoo.

The pulsating sounds of drums, cowbells and whistles echo throughout Paradise Harbour as those who have soaked in the show get the opportunity to further experience a few minutes of junkanoo, with the option of joining in the rush.

“The show was great and it was totally awesome, especially the acrobats” said Patrick Cartwright, an attendee at Saturday’s show.

“I truly enjoyed the fire dancing and the acrobatics,” said Michael Smith, a first-time visitor to The Bahamas from California.

Lincoln Rigby, a Bahamian who attended the show, commended Atlantis for offering a festival and a show that offers various components that are all entertaining, he said.

“There were acrobatic acts, it was funny, it was interactive, the audience enjoyed it and I certainly enjoyed it,” said Rigby. “It is different and there is no other hotel that offers this locally, so people should really go and check it out.”

Asked what he really enjoyed about Showtime at the Pink Flamingo, Rigby said while all of the acrobatic acts were ‘outstanding’, he found the performances of Daredevil Chicken  to be very funny.

Daredevil Chicken features Marc and Svetlana, a married couple who gives the audience no holds barred relationship advice, while incorporating an array of surprising clothing scenes – or the lack thereof – wig adjustments, and a tasty exchange of bananas.

“They were interactive and they got the audience involved and it was very enjoyable,” Rigby said. “I think for the most part locals would be very interested in this show once word gets out and they hear about it.

“I think tonight, the audience was fifty-fifty locals and visitors, and that’s good.

“It is different. It is not something that Bahamians can get locally, so I think it should be something that they should totally go out and enjoy while it is here.”

Meanwhile, Rick Gallagher, Vice President of Special Events and Entertainment at Atlantis, told Eyewitness News Online after Saturday’s show, that Atlantis wanted to offer an entertainment show that would pique the interest of residents and tourists.

“We thought, what is that thing that falls in the middle, where both of them [tourists and locals] are going to love this, and so we came up with something different that is not being held anywhere else, and we thought our tourists would like it as it is a new thing for them and residents will have something great to do every night of the week,” Gallagher said.

The Special Events and Entertainment VP admitted that the Twilight Electric Festival initially got off to a slow start because there was a slow ramp-up to the actual opening.

He noted, however, that this has since picked up.

“So far the feedback has been really great,” Gallagher said. “Everybody leaving the show tells us how much they have been really enjoying it, and so we are really pushing the envelope with it and we have gotten a lot of response, both from the residents as well as the tourists.”

Gallagher said he would love to have the Twilight Electric Festival return to The Bahamas next year, and hopefully see it grow.

“Persons are now understanding what the show is about and how entertaining it is, and we are really starting to notice a lot of people coming to the show.”

The Twilight Electric Festival and Showtime at the Pink Flamingo is held every Wednesday through Sunday until June 23, 2019.

To purchase tickets, guests can visit the Atlantis Box Office in the Convention Center or purchase admission at the festival entrance.