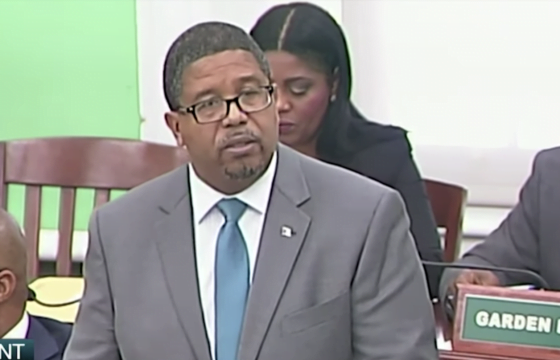 NASSAU, BAHAMAS – Amid assertions from the opposition that the government was set to significantly reduce social welfare programs in The Bahamas, Deputy Prime Minister and Minister of Finance Peter Turnquest assured yesterday that despite the overhaul budget for the Department of Social Services decreasing marginally, overall, the budget for social assistance benefits programs have notably increased.

The intervention came as Turnquest led debate on the budget in the House of Assembly.

“Although the Department of Social Services had a 1.7 percent decrease overall in line with the general practice of more precise budgeting, we increased the budget allocation significantly in the most important areas; specifically, the overall social assistance benefits allocation by $1.6 million in the upcoming budget year,” he said.

“It is important to repeat this. The allocation overall for social assistance benefits will increase by $1.6 million in the upcoming budget year.
“This information is right there in the budget, so there is no need to be misleading about that point.

“This was deliberate to ensure that those Bahamians, who need to rely on the government for financial help as they face what we know are truly hard times, can find the support they need.

“We also increased our allocation for the ‘Food Assistance Programme’ by $1.4 million to $14.2 million, and our ‘Subsistence/Support of Persons Contract’ by $0.3 million to $2.6 million this year.”

Turnquest addressed the decrease in Parliament.

“It is worth explaining the allocations in the budget to support our social safety net, as some in the opposition and in the media have misrepresented the numbers, particularly those concerning line item ‘2721001’ under social assistance benefits.
“Beginning in [the] fiscal year 2014/15, the Progressive Liberal Party (PLP) spent approximately $4 million on the ‘Renewable, Inspiring, Sustaining, Empowering (or RISE) Social Safety Net Reform project, which was started under an IDB (Inter-American Development Bank) loan facility in 2012.

“However, Mr. Speaker, due to the fact that the former government could not meet the deliverables of the facility, the program was unceremoniously stopped in August of 2017.

“This administration, however, saw the value in the program, which was centered on alleviating poverty in The Bahamas by changing behavior to bring about improvements in education and health of those in the lower income class.

“To this end, we took away some of the positive lessons from the RISE program and integrated them into our core service offerings, so that those that would have been assisted by the program initially would not lose their net benefit.

According to the minister, the government achieved this by allocation $1 million in 2018.2019 toward the services of the old program in 2018/2019, but found that these services did not require the level of funding as only $75,760 was spent as of March.

He said, “Despite the allocation for 2019/20 being much lower than the $1 million that was budgeted in 2018/19, the $488,951 actually represents; one, the closing out of the social safety net program; and two, proper budgeting to fit the needs of a particular program.

“I would note also that allocating just under $500,000 allows us room to expand the services currently offered under this line item, which will help to further alleviate poverty in The Bahamas. “