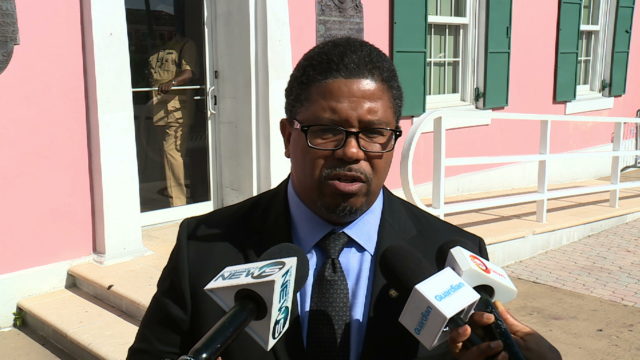 NASSAU, BAHAMAS – As environmentalists expressed shock at the government’s decision to renew the four southern licenses for Bahamas Petroleum Company to drill an exploratory well offshore by December 2020, Minister of Finance Peter Turnquest indicated yesterday that the Minnis administration’s hands were tied because of certain commitments it met when it assumed office.

Turnquest was responding to questions from Eyewitness News on the contentious issue and the objections from quarters of the public.

“The only thing I would say to that is that there are obligations that a previous administration has locked us into and I would leave that to the responsible ministers to talk about, but we understand the concern of the environmentalists,

“We certainly will do all we can to ensure that we put in place the protective mechanisms if in fact, they do drill and we’ll see what happens.”

The previous Christie administration first granted BPC an exploratory license near the end of its term in 2007.

The licenses were signed into full effect in April 2007.

In the lead up to the 2012 general election, then Prime Minister Hubert Ingraham said his administration if reelected, would not pursue oil drilling in The Bahamas.

Before the general election that year, the Ingraham administration suspended BPC’s licenses.

The oil exploration company sought the renewal of its licenses in April 2012.

Five exploration licenses to pursue offshore drilling were approved until April 2015, with the company committing to spud an exploration well by April 2013.

The government renewed four southern licenses for a further three years to mid-2018, with an initial exploration well by April 2017.

In February 2018, Minister of the Environment Romauld Ferreira said BPC and the government were in talks geared toward exercising some “housekeeping” ahead of the company’s schedule to spud an exploratory well that April.

At the time, the minister asked, “Is it something we want to pursue? Do we have a need for it against the backdrop of unemployment? Is it a direction that we want to grow our economy? Can it be co-managed with tourism?”

Joseph Darville, the chairman of the non-profit organization Save The Bays (STB), said Monday that the decision to approve BPC exploration licenses was “shocking” given previous assurances from the government to the group that it was not moving in that direction.

The government did not make a formal announcement.

Darville said it was “disturbing” that the company broke the news.

According to Darville, the Bahamian people should have been allowed to have their say by way of a referendum.

BPC advised that the government has engaged Black & Veatch to consult on environmental issues related to the drilling.

The company said it is in discussions to enlist a farm-in partner to assist with the initial exploration.

“The confirmation from the government of The Bahamas that the current term of our four southern licenses extends to 31 December 2020 provides the company with a certainty of tenure over the company’s licenses, replacing any perceived above ground issues with complete clarity in fact and law,” BPC’s CEO Simon Potter said.

“This position has been arrived at following extensive government consultation and whilst this has taken the company a while to establish, there is now a very clear two-year window to advance plans for and to drill an exploratory well providing certainty to potential partners as we move forward in our farm-out discussions.

“Today’s news will add considerable impetus to this process.”

An oil strike would really kick start the economy which is badly needed. Jobs & revenue.