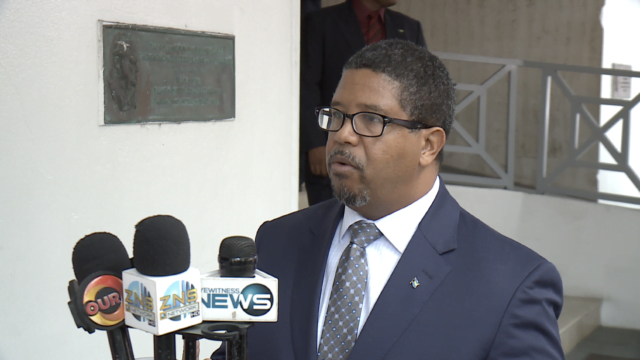 NASSAU, BAHAMAS – Minister of Finance Peter Turnquest on Tuesday sought to clarify once again the increases allocated for travel in the 2019/2020 fiscal budget.

Speaking to reporters before heading to Tuesday’s Cabinet meeting, Turnquest reiterated that the increase in the allocation in the upcoming budget for travel and subsistence from $8.95 million to $18.93 — an increase of $5.4 million — was partly the result of a “reporting error”. He said the increase in the line item was mostly the result of the salaries for Urban Renewal, which he said should have been captured under the Department of Social Services but was mistakenly added to the air transport line item under travel and subsistence.

The error accounted for $3.5 million of the total increase in air transport for domestic travel.

Yesterday, Turnquest said the $4 million increase in travel represents a real increase year-to-year because the government is actually “right sizing” or “right budgeting” for travel.

“What you would have found in years past is that you have this line for travel but then there are all these virements [the process of transferring items from one financial account to another]during the year where people would pull from some other budgeted item and put it into travel and cover the cost,” Turnquest explained.

“So what we have done this year is we’ve allocated all the travel to the travel line and so it’s not necessarily a real increase per say,  but a matter of how it is presented.”

According to Turnquest, there are some specific items that would cause an increase in travel. He said the prime minister’s office will conduct a number of marketing trips this year and there are several international conferences to attend. He noted, however, that overall the increase in travel is not a significant increase once the government “evens out” and “takes out” reallocations.

The ministry will receive $541,975 for domestic travel in the upcoming budget, up from the $21,000 in the current fiscal year.

The allocation for international travel also increased from $7,600 to $17,100, the budget reflects.