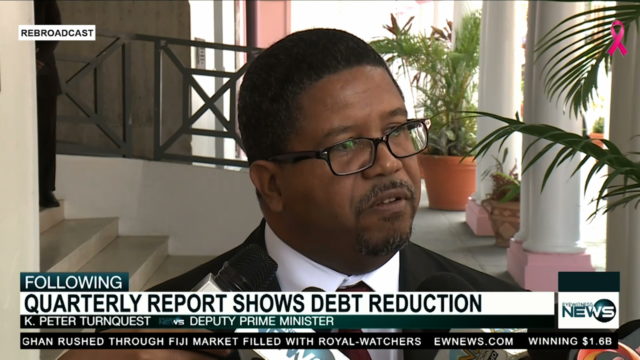 Just hours after the Government released its first quarterly report on budget performance, which reflected that the overall deficit had been reduced by 52 per cent, Chester Cooper, the Progressive Liberal Party’s shadow Minister of Finance said while the “snapshot effort” of the Government was commendable, it was still too soon to make empirical conclusions.

However, Finance Minister Peter Turnquest shot back at Cooper late last night, releasing a statement which outlined that it was indeed sad, but revealing that Cooper chose not to join the chorus of Bahamians from across the political divide, who yesterday commended the government for its historic step toward greater transparency and accountability in the management of the people’s money.

Blasting government on its quarterly report, Cooper claimed that the collections for this quarter are significantly under budget.  He said this is a clear indication that projections are not being met, and went on to suggest that the projected net increase for the year will also not be met.

Also noting the potential for seasonality in revenues,  Cooper said it is still a major red flag and the PLP maintains that the recent value-added tax (VAT) hike was ill-advised.

Meanwhile, the Finance Minister said Cooper’s comments must be an expression of frustration and disappointment with his Party, knowing their painful past experience.

The Opposition, Turnquest said, had the opportunity to demonstrate leadership and fiscal responsibility, but they proved that they were not up to the task.

“They were neither accustomed to nor familiar with accountability and transparency standards for public financial administration, or keeping basic promises made to the Bahamian people, for that matter,” he said.

“Despite the Opposition’s obvious queasiness and discomfort with this new era of enhanced transparency and openness, rest assured that this administration will not allow The Bahamas to go back to the dark days of obscuring the records and disregard for the facts and transparency surrounding our fiscal performance.”

Turnquest said during the 2018/2019 Budget debate, he made a promise to the Bahamian people to use new revenue yields – in part – to begin to close the country’s chronic deficits; to begin to pay down the $300 million in old bills and arrears, and to report to the Bahamian people on a quarterly basis the state of their budgetary affairs – the people’s money – even though there was and is not yet any legal requirement to do so.

“Unlike the ever-talking PLP that promises and promises and never delivers, today’s presentation of the first quarter provisional results is a promise kept, as is our faithfulness to the use of the additional funding received through the VAT increase consistent with our documented plans as approved by Parliament,” Turnquest noted.

“Some $39 million of past due bills amassed and unpaid for years under the PLP has been paid with a balance of $131 million to go during the remainder of the year.  Another promise kept.

“The Opposition Spokesman’s absurd suggestion that the results delivered to date are based upon some contrived ‘cash management’ exercise is laughable and speaks to their feeble effort to downgrade the positive steps achieved by this administration so far with the fiscal consolidation promised.”

Turnquest said coming from a Party that reportedly left hundreds of millions of dollars in undisclosed, unbudgeted and unpaid bills when they were booted out of office, one would think that the Opposition would remain silent.

“No doubt, proper cash management is a significant component of good fiscal management, but unlike the Opposition, our program does not include the manipulation of results reported,” he said.

“Clearly, the provisional performance report and its early promising trends stand there for all to see, making the Opposition uneasy.  I remain optimistic that barring unforeseen circumstances, the government will meet its deficit targets with no need for further taxes or unplanned borrowing.”

Turnquest said the Minnis led administration will stay disciplined, focused and resolute in achieving the fiscal targets set and fulfilling its promises to the Bahamian people.