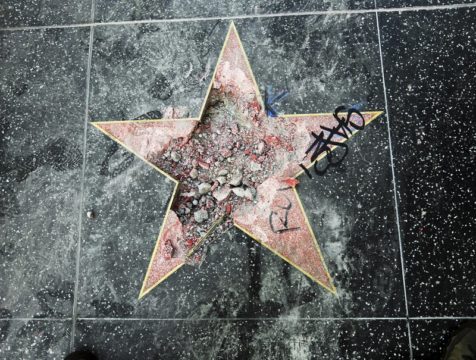 This photo shows Donald Trump’s star on the Hollywood Walk of Fame that was vandalized Wednesday, July 25, 2018, in Los Angeles. Los Angeles police Officer Ray Brown said the vandalism was reported early Wednesday and someone was subsequently taken into custody. Authorities said a pickax was used in the vandalism. (AP Photo/Reed Saxon)

LOS ANGELES (AP) — President Donald Trump’s star on the Hollywood Walk of Fame was destroyed before dawn Wednesday, and a man was later arrested.

The vandalism was reported around 3:30 a.m. A pickax was found at the scene on Hollywood Boulevard.

“When people are unhappy with one of our honorees, we would hope that they would project their anger in more positive ways than to vandalize a California State landmark,” Leron Gubler, president of the Hollywood Chamber of Commerce, said in a statement.

The star, which recognizes Trump for his work on the reality show “The Apprentice,” will be covered for several days as the Hollywood Historic Trust repairs it.

The star was previously vandalized by James Otis with a sledgehammer and pickax days before the November 2016 election.

Otis, who pleaded no contest to the felony, was sentenced to three years of probation for vandalism and was ordered to pay $4,400 for the damage and attorney’s fees and perform 20 days of community labor in 2017.