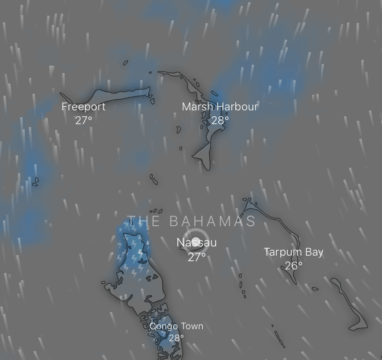 Abaco, Andros, the Berry Islands, New Providence, and their adjacent waters are all under severe weather warnings.

Grand Bahama, Exuma, Eleuthera, and their adjacent waters are also under a severe thunderstorm watch.

In its latest update, the department said clusters and lines of thunderstorms, along with moderate to heavy rainfall is moving northeastward toward and across the warning area.

“Some of these thunderstorms will be severe at times and may cause strong gusty winds, dangerous lightning, heavy downpours, hail and possible waterspout or tornadic activity, the update said.

“Localized flooding is also possible during these events.”

Boaters in the warning area are advised to remain in port.

Residents should stay indoors and away from windows as conditions worsen. They are also advised not to seek shelter under trees or in water as those can become lightning conductors.