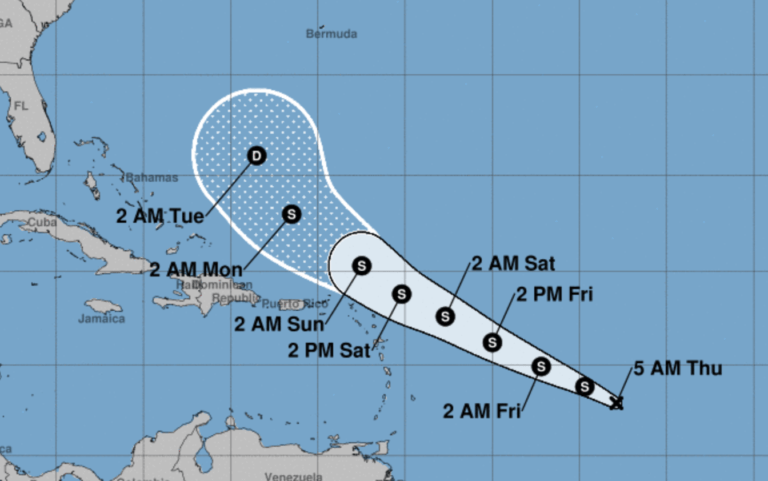 NASSAU, BAHAMAS — Tropical Depression Eleven in the Atlantic has disorganized, according to the National Hurricane Center, which said the system is still expected to strengthen into Tropical Storm Josephine later today.

“Some strengthening is forecast during the next day or two, and the depression is expected to become a tropical storm later today,” the hurricane center said.

The system was expected to develop into a named storm last night.

As of 5am, the tropical depression was over 1,000 miles east-southeast of the northern Leeward Islands,

The center projects the weather system could have maximum sustained winds of 50 miles per hour within the next 48 hours.

On the forecast track, the center of the system could pass northeast of The Bahamas on Monday night or early Tuesday morning.

The Bahamas is not projected to be in the cone of the system; however, the hurricane center warned that “hazardous conditions” can occur outside of the cone.

Chief Climatological Officer Michael Stubbs has said modeling projects the system could declassify into a tropical depression again as it gets near the southeastern Bahamas on Monday.

The general motion is expected to continue for the next few days following by a turn toward the northwest late this weekend or early next week, according to the center.

“There has been little change to the track forecast or reasoning from the previous advisory,” read the advisory.

“The system should continue to move west-northwestward on the south side of the subtropical ridge into the weekend.

“The official track forecast is close to the latest NOAA corrected model consensus or HCCA prediction and not much different from the previous official forecast.”

There were no coastal watches or warnings in effect at last report.