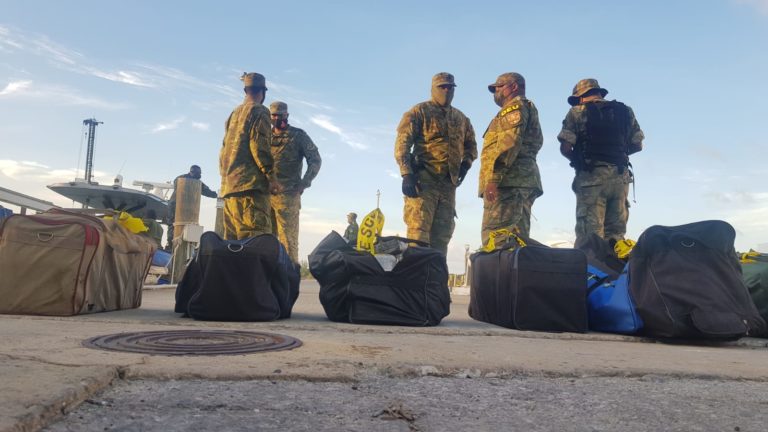 No arrests made; suspects urged to turn themselves in

According to reports, personnel from Operation Bahamas and Turks and Caicos (OPBAT), the US Coast Guard, US Customs and Border Patrol and the Royal Bahamas Police Force participated in the operation.

Law enforcement officials launched an investigation after receiving intelligence on Sunday that an aircraft was inbound to The Bahamas with suspected cocaine onboard.

Assistant Commissioner of Police Solomon Cash told members of the media that when the aircraft landed on the Governor’s Harbour airstrip on Sunday, law enforcement officers commenced a surveillance exercise of the aircraft and the airstrip.

Cash said two men were observed leaving the aircraft and were searched but nothing was found in their possession.

They were subsequently allowed to leave the airstrip and the joint operation continued into the night.

Cash advised that sometime after 9am on Monday, officers recovered from the airstrip six multicolored bags containing suspected cocaine.

He said police are now looking for the two men seen departing the aircraft for additional questioning.

“What we are saying to those two individuals that disembarked the aircraft is that they should surrender to the police,” he said.

“I can tell you and I can assure you that we are following very significant leads to who they are and they are being sought at this time.”

Cash explained that “as the investigation unravels and as the surveillance exercise unraveled additional information, we have reasonable cause to suspect that they are the ones responsible”.

He said it is expected that the men are still on the island.

Cash added that the incident is believed to have originated outside of The Bahamas.

“I believe it’s a transnational crime, based on my information; a transshipment outside of the jurisdiction of The Bahamas into The Bahamas,” he added.

He, however, did not want to speak further on the matter.

There have been no arrests made in connection to the bust.

Additional officers from the forensic department have also been dispatched to the island and are assisting with the investigation.