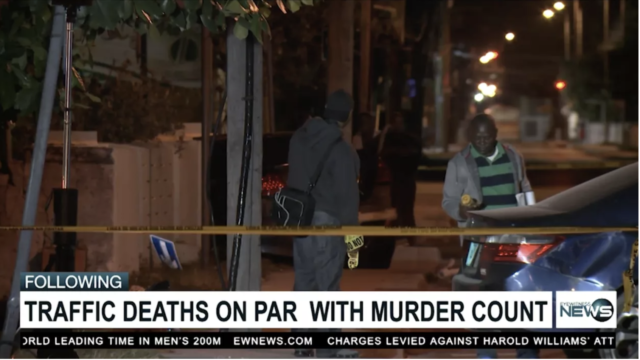 NASSAU, BAHAMAS – The traffic fatality count for 2019 is now on par with the murder count, forcing traffic officials to sound the alarm and caution motorists to slow down and adhere to road safety regulations.

Annual crime statistics produced by the Royal Bahamas Police Force (RBPF) show that there have been more persons dying at the hands of criminals than in traffic accidents; but, traffic officials fear that traffic fatalities could soon outpace murders.

“We have a primary concern for persons commuting along our roadways,” he said.

“We ask motorists to obey speed limits and exercise caution at all times.”

What’s even more startling is the frequency at which these accidents are happening.

A review of current murder statistics revealed the latest murder was recorded March 26.

Meantime, April has been littered with traffic fatalities, four within the span of the first two weeks of the month.

The latest unfolded on Sunday in Andros, two days prior to that there was a traffic fatality on San Salvador and 24 hours before that one, there was a fatal accident in New Providence.

“It is a very serious public health issue, a social issue and it’s also affecting our economy,” she opined.

“The people who are dying are wage earners, there are people having life changing injuries; and so, it has economic implications and ultimately creates a lot of grief.”

Hanna-Martin has called on transport minister Renward Wells to bring into effect the provisions of the Road Traffic Bill, which she said contains a comprehensive safety regime to fill gaps in the current law which includes the statutory creation of a Road Safety Council.

“So, this council is to be established to scientifically observe causes of accidents, to create policy initiatives and to help develop empirical evidence and a database so that there is a more scientific analysis of traffic accidents,” she explained.

“Out of that would come public education.”

National security minister Marvin Dames agreed with Hanna-Martin’s assertion that public education is needed ahead of the bill’s enactment.

“You can expect to see a greater focus on education and training,” he promised.

Now into the second quarter of 2019, and with eight months left in the year, the current traffic fatality count which stands at 20 accounts for at least one-third of the total number of traffic fatalities counted in 2018 which stood at 69.