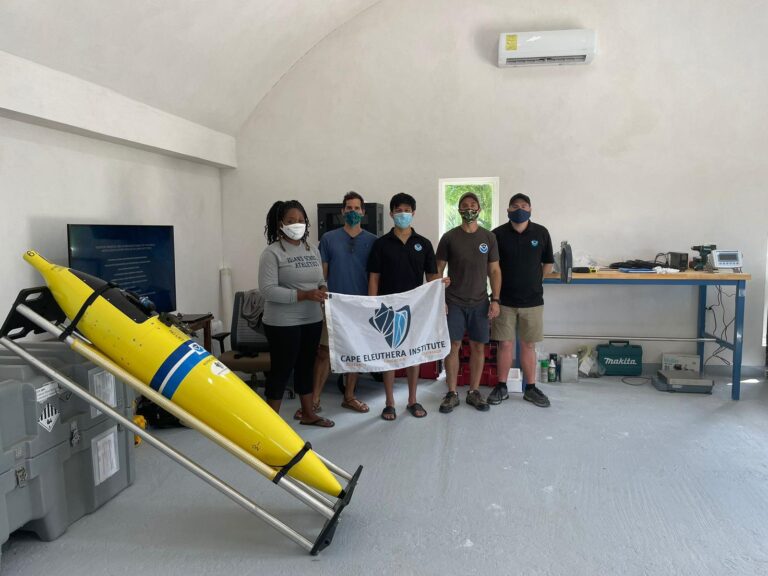 The Cape Eleuthera Institute (CEI) team with a sea glider.

ROCK SOUND, ELEUTHERA — The Cape Eleuthera Institute (CEI) and Island School, in conjunction with the University of Miami, will complete a new mission tomorrow: the retrieval of an underwater sea glider and its data that could improve forecasting and explain why The Bahamas experiences more frequent and intense storms.

Marjahn Finlayson, a research scientist at CEI who specializes in atmospheric science, hurricanes and climate change, has spent the last few months working on the special project.

“When it comes to hurricane forecasting and modeling in general, one of the things we have issues with is models are normally very — they’re always wrong because there’s always one thing that the models always misses out on,” she told Eyewitness News from CEI’s largely self-sustained base near the southwestern-most tip of Eleuthera.

Sea gliders, a tool to track hurricanes from underwater, patrol a designated area by gliding up and down to different depths, much like a submarine, and record ocean surface temperature, salinity and other data to improve forecasting models by incorporating ocean model performance.

According to Finlayson, who along with the research teams at the institute hopes to retrieve the underwater glider tomorrow, the device is a critical tool to determine ultimately how ocean processes and conditions affect storm intensity, as well as climate change, by comparing data.

The underwater glider, located near Lighthouse Point, was launched In September and has remained at sea collecting data at various piloted points.

The data is sent to the National Hurricane Center for its hurricane forecasting models to give a clearer picture of what the intensity of a hurricane will be as it approaches.

“So, the good thing about this project is unlike other forecast models that would really look at atmosphere-only components or atmosphere and ocean components, with this, the coupled model, which is the atmosphere-ocean model, it improves the ocean characteristics that affect hurricanes,” Finlayson said.

“So, one of those things being sea surface temperature.

“Salinity is something that is interesting too because if there is less salt in the water, we expect that the hurricanes will be more able to form, so it makes for better development for that as well, and just looking at how water masses also affect hurricane development as well.”

The data compiled from Cape Eleuthera’s Institute’s project will be compared to similar studies done with underwater gliders in Puerto Rico, Dominican Republic and other jurisdictions that used the data in real-time to better predict weather systems approaching those islands.

Finlayson noted that the precision it will allow in forecasting will be the difference between being able to predict on what day the storm will intensify and to what extent, including the category storm it will become in an accurate time window.

Hurricane Dorian, which struck the northwest islands, namely Abaco and Grand Bahama, remains fresh in the minds of Bahamians.

The storm rapidly intensified into a Category 5 hurricane, catching many residents off guard, despite early warnings about the potentially devastating impact of the storm.

“We didn’t have an idea in 2019 of how strong,” Finlayson pointed out.