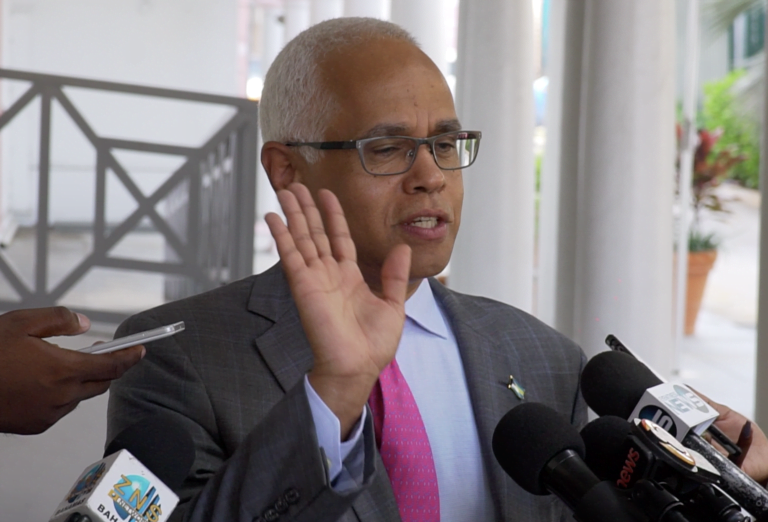 NASSAU, BAHAMAS — The Harbour Island wedding request went up the command chain, according to Tourism Minister Dionisio D’Aguilar, who today explained the hotel operator reached out to a number of officials, including himself.

D’Aguilar said he “deeply” apologized for the consternation and angst faced by Bahamians, residents and visitors due to the sudden weekend lockdown.

He suggested officials were prompted to act quickly based on medical advice but would seek to strike a better balance moving forward.

“It was very unfortunate that the lockdown came so suddenly and created the angst by many many Bahamians and visitors trying to exit the country, trying to have an event,” he said.

“It caused a lot of consternation so that was a learning experience for us and we are trying to prevent that moving forward.”

D’Aguilar continued: “Sometimes when you get in a room with health professionals and they explain the scenarios to you and what’s happening and their advice is to move very quickly, there are unintended consequences.

“I think we have to give a little bit more consideration to the unintended consequences while we’re trying to save lives and prevent the growth of the virus. We also have to take into consideration that this going to cause major consternation and disruption to peoples lives and we have to ensure that we don’t allow that to happen again, and to give people as much notice as possible.”

The tourism minister also apologized for the lack of clarity concerning the emergency orders, noting not many knew they could apply to the competent authority for an exemption.

He was responding to questions from the media concerning the approval of a destination wedding in Harbour Island on Saturday.

Photos and videos from the wedding sparked widespread outrage with the guests appearing to breach social distancing laws as others across the country were forced to cancel their events.

“I think obviously the hotel operator in which this event was taking place was started to ask the necessary authorities; ask the member of Parliament; ask the minister of Tourism; ask the competent authority, so it all went up the chain of command,” D’Aguilar said.

“I can’t deny that I was a part of the request, but obviously it was a decision considered by the competent authority – I think it was another wedding approved as well.

D’Aguilar said: “I guess maybe we failed and I apologize for that. We failed to allow people or to inform people that there is the option to always appeal to the competent authority for an exemption if you feel the case is compelling and he can consider it.

“And I think in many instances because it was so sudden and such an immediate — you know Friday at 3 to lockdown at 7, and you got an event planned on Saturday, it was very very troubling.”

Meanwhile, Assistant Superintendent Audley Peters said today charges are still pending in relation to that matter as the circuit magistrate has not been able to travel to the island.