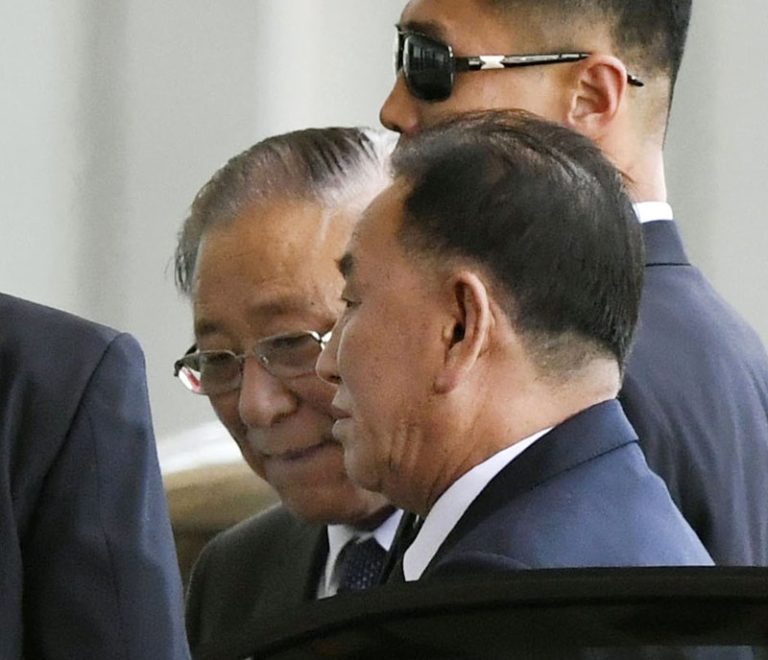 BEIJING (AP) — A top North Korean official headed to New York on Wednesday for talks aimed at salvaging a summit between Kim Jong Un and President Donald Trump on the future of Kim’s nuclear program, in the North’s highest-level mission to the United States in 18 years.

Yonhap said Kim, who had arrived in Beijing on Tuesday, was traveling with five other North Korean officials.

Kim, one of North Korean leader Kim Jong Un’s most trusted aides, is a former military intelligence chief and now a vice chairman of the ruling party’s central committee.

North Korea’s mission to the United Nations in New York is its sole diplomatic presence in the United States. That suggests Kim might have chosen to first go to New York because it would make it easier for him to communicate with officials in Pyongyang, North Korea’s capital. North Korea and the United States are still technically at war and have no diplomatic ties because the 1950-53 Korean War ended with an armistice, not a peace treaty

Trump confirmed Tuesday that Kim was to hold talks with Secretary of State Mike Pompeo. But it wasn’t immediately known what else he would do in the United States. South Korean media speculated that he was carrying a personal letter from Kim Jong Un and may push to travel to Washington to meet with Trump.

Pompeo has traveled to Pyongyang twice in recent weeks for meetings with Kim Jong Un, and has said there is a “shared understanding” between the two sides about what they hope to achieve in talks. South Korean media speculated that Pompeo could make a third trip to Pyongyang after Kim Yong Chol’s U.S. trip.

Trump and Kim Jong Un were set to hold their summit June 12 in Singapore, but Trump announced last week that he was pulling out of the meeting. Since then, he has suggested the summit could be back on, and Kim Yong Chol’s trip to the U.S. seems to imply that preparations for a meeting could be in the final stages.

Kim Yong Chol’s trip comes amid two sets of other pre-summit talks between Washington and Pyongyang.

A team of U.S. officials led by former U.S. nuclear negotiator Sung Kim began talks with North Korean officials at the Korean border village of Panmunjom on Sunday to set the agenda for the summit.

A North Korean delegation led by another of Kim Jong Un’s trusted aides, Kim Chang Son, flew to Singapore on Monday night for talks with U.S. officials to discuss logistical issues for the summit. Details of those talks hadn’t emerged yet.

North Korea’s flurry of diplomatic activity following a torrid run in nuclear weapons and missile tests in 2017 suggests that Kim Jong Un is eager for sanctions relief to build his economy and the international legitimacy the summit with Trump would provide. But there are lingering doubts on whether Kim will every fully relinquish his nuclear arsenal, which he may see as his only guarantee of survival in a region surrounded by enemies.

While there have been a few instances in which countries were persuaded to abandon their nuclear ambitions in exchange for sanctions relief and compensation, none of the cases are directly applicable to North Korea, which has advanced its nukes further and with greater zeal than any of the others. The North’s arsenal now includes purported thermonuclear warheads and developmental long-range missiles potentially capable of reaching mainland U.S. cities.

But South Korea, which has lobbied hard for the talks between Trump and Kim, has insisted that Kim can be persuaded to abandon his nuclear facilities, materials and bombs in a verifiable and irreversible way if offered credible security and economic guarantees.

China, North Korea’s longtime ally and chief trading partner, has sought to position itself as a key intermediary in talks over Pyongyang’s nuclear weapons program. Beijing backs the North’s proposal for a phased and synchronized denuclearization process, while the United States insists on a comprehensive one-shot deal in which North Korea eliminates its nukes first and receives rewards later.

Russia said Wednesday that its foreign minister, Sergey Lavrov, will travel to North Korea for talks on Thursday.

Kim Yong Chol would be the highest-level North Korean official to travel to the United States since 2000, when Vice Marshal Jo Myong Rok visited Washington and met President Bill Clinton amid warming ties between the wartime foes. Secretary of State Madeleine Albright made a historic reciprocal visit to Pyongyang later in 2000 in a bid to arrange a North Korea visit by Clinton. Ties turned sour again after President George W. Bush took office in early 2001 with a tough policy on the North.

Kim Yong Chol’s official title is a vice chairman of the central committee of the ruling Workers’ Party. Previously, he was a four-star army general and a military intelligence chief who is thought to have been behind two deadly attacks in 2010 that killed 50 South Koreans and an alleged 2014 cyberattack on Sony Pictures. Both Seoul and Washington imposed sanctions on him in recent years.