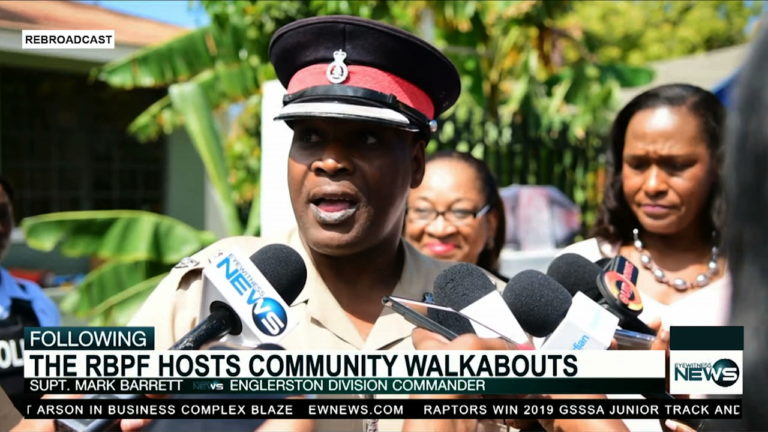 NASSAU, BAHAMAS – The top brass of the Royal Bahamas Police Force (RBPF), supported by district superintendents and new police recruits, kicked off the start of Police Month on March 1, with neighbourhood walkabouts aimed at forging closer relationships with the community.

Officers participated in the initiative, which was rolled-out in every island.

The first stop in the two-hour community walkabout was the Bain and Grants Town constituency.

Police commissioner Anthony Ferguson and other officers were warmly received by residents who welcomed the idea of forging better relations with the armed forces.

“Coming here we see a number of persons coming into their yards and these are the people that we want to make sure that we reach, build better relations with them and reaffirm that police are looking to build better partnerships within these communities,” he said.

The second stop in the walkabout took officers to the Englerston constituency.

Officer in charge of that area, Superintendant Mark Barrett revealed that community walkabouts are an ongoing initiative in his area.

He said it helps to forge closer ties with residents in the area.

“Most of us are from these communities and know some of the individuals that reside in this community. So, we often go back and communicate with them so the partnership is relatively easy; we just have to continue to make ourselves available and open to understanding exactly what is happening within this community,” Supt. Barrett said.

Similar efforts are also underway in the Free Town constituency as well, according to Superintendent Oswald Nixon.

He confirmed that their efforts are targeted at creating better relationships with youth in the area.

“We have delinquent students and students who are troubled and have other issues at home that they bring to school; so, the relationship that police want to have with the community is to ensure that we are able to reach out to these kids and try to enhance their thoughts and processes as it related to staying out of trouble,” Supt. Nixon said.

The close-knit community of Fox Hill was next on the list.

They too welcomed the idea of officers flooding their community with support.

“It’s a blessing to have these officers pass through the area, even if it’s just a simple hail,” one male resident remarked.

Nassau Village and the southern district were the last two stops.

Police Commissioner Ferguson summed up the initiative as a success.

“I’ve heard from all districts from throughout the country and I have received good reports. We have accomplished exactly what we wanted to accomplish today,” he said.

“This is a great way to launch police month and we look forward to continual relationship building within our communities moving forward.”