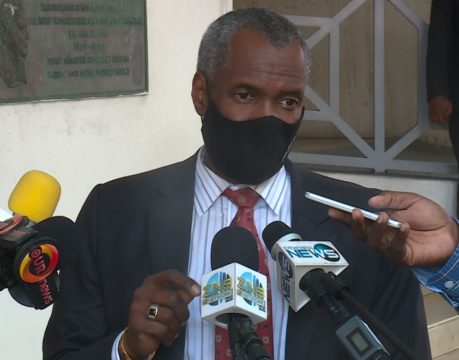 NASSAU, BAHAMAS — Deputy Prime Minister Desmond Bannister yesterday downplayed the prime minister’s suggestion that he would serve as “co-prime minister” if the Minnis administration is given a second term.

On Monday, Prime Minister Dr Hubert Minnis said if the Free National Movement (FNM) is successful in being re-elected to office, he and Bannister would “split” the leadership of the government. Minnis said he would concentrate on the poor, granting land and Bahamian ownership.

In an interview with reporters outside Cabinet yesterday, Bannister said he would be honored to carry out the duties of the prime minister.

“He assigns jobs to ministers, so if he assigns certain things to me in my portfolio, there are things I’d be honored to carry out, but he’s the prime minister.

Minnis explained that he wants to “confine” himself as prime minister in the next term just to deal with specific components of governance, while the deputy prime minister would run the rest of the government.

Upon coming to office, the prime minister indicated he would not take on any ministry, but would be a “minister of ministers”.

However, several Cabinet shuffles over the past four years have landed Minnis with the position of health minister briefly and now finance minister.

The Carmichael Road incumbent has not yet been ratified in the upcoming general election.

However, Bannister advised yesterday that he is seeking to be re-elected in the Carmichael Road constituency in the upcoming general election.

In the last general election, in 2017, Bannister won the Carmichael Road constituency with 3,073 votes against Keith Bell, who received 1,595 votes.