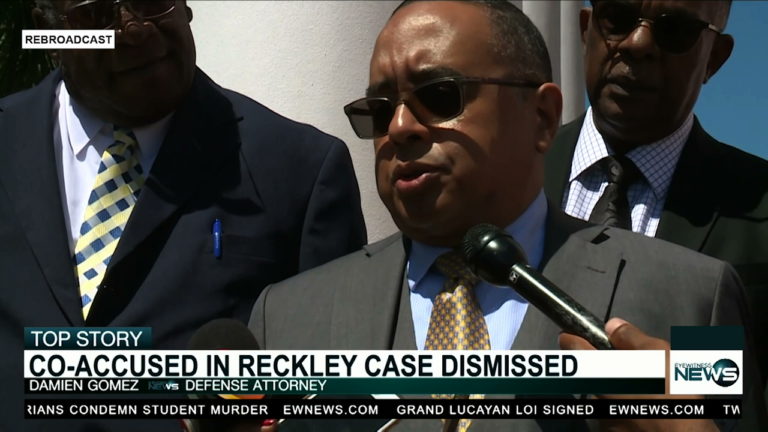 NASSAU, BAHAMAS – Three of six persons involved in the highly publicized Michelle Reckley money laundering and fraud case were released of all charges brought against them by the Crown following a shocking move by Magistrate Ambrose Armbrister on Friday.

Michelle Reckley, alongside five others, were hauled before the Magistrate Court on February 13 on a laundry list of 41 money laundering and fraud charges.

The prosecution alleged that Reckley, along with James Hall, Joseph Lightbourne, Stephanie Collie, Kylone Vincent and James Wildgoose were involved in unscrupulous fraudulent activity while Reckley served as Director of Urban Renewal in Grand Bahama.

According to magistrate Armbrister, the 22 money laundering charges were statute barred because the prosecution – in violation with the Proceeds of Crime Act – took too long to file charges against the accused.

Under the Criminal Procedures Code, Section 213 – charges on money laundering must be filed within six months of the alleged activity.

Considering that the charges were only filed one month ago, Ambrose told Collie, Vincent, Wildgoose that all charges were dropped against them.

The prosecution also brought Chistopher Symonette before the court to be charged along with the trio; but he was never formally charged.

He too was told that he was a free man on Friday.

“The money laundering charges were statute barred and there was no jurisdiction in the magistrates’ court to hear and determine those matters so he released our respective clients as a result of that,” Damien Gomez, defense team attorney, explained.

This is the second surprise to unfold in just a matter of weeks since the case was initially brought before the court.

The first blunder was that the prosecution brought six individuals before Magistrate Joyann Ferguson-Pratt, but there were no court documents to outline what charges would be brought against them.

Since then, magistrate Ferguson-Pratt recused herself from the case and handed it over to magistrate Armbrister.

“This is the second occasion that I have come to court and seen persons brought before a magistrate without even a sheet of paper setting out the charges and it is clear, from what happened this morning, that no attention was given to more than half of the people who were brought before the court,” Gomez said.

“It’s really a very bad reflection on the prosecuting authorities that something as obvious as this was not discerned.”

Symonette said the prosecutions abuse of justice was a waste of his time and a blow to his professional image.

“This damaged my professional reputation and my character; but the court has spoken and I am free to go,” Symonette exclaimed.

Gomez told Eyewitness News Online Friday that the defense team is confident that their remaining clients will be vindicated.

“They will return on October 21 for their trial and we anticipate that we will have them vindicated at the end of that trial period,” Gomez opined.