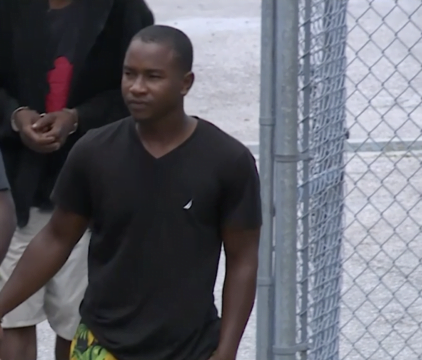 Jason Ferguson, 33, Diego Carey, 24, and Phynarge Wright, 22, appeared before Magistrate Samuel McKinney on Tuesday, charged with the brazen daylight robbery of the John Bull jewelry store at the Baha Mar Resort on May 5th.

According to Ferguson’s statement, Wright and Carey approached him expressing that they had a job at Baha Mar.

Court documents state that the men utilized a black Honda to examine the property on May 1stand returned on May 5thin a champagne-colored Ford Explorer to execute the robbery.

The court heard that Ferguson agreed to drive the duo to the Baha Mar Resort to carry out the massive jewelry heist.

A store clerk also revealed that one of the suspects entered the store wearing dark shades when she heard glass shattering and then another suspect entered shortly thereafter.

It is also alleged that being concerned together, the trio stole $451,624 in goods from the jewelry store which included items such as Rolex watches, earrings, pens, bracelets, and a 3-stone diamond worth $86,615.

Carey and Wright pleaded not guilty to the charges, however, Ferguson pleaded guilty.

Given an opportunity to explain his actions, Ferguson told the judge that he has a hard life as he suffers from a skin disorder which causes unsightly scars and unpleasant odors. He said this causes employers to discriminate against him and eventually fire him.

Ferguson also told the magistrate that because of his condition, it is hard to provide for his 7-year-old daughter.

Nonetheless, he admitted that it was a foolish decision and he is prepared to face his consequences and get back to his family as quickly as possible.

Taking into account the significant amount of damage and the value of the items stolen, Magistrate McKinney sentenced Ferguson to five years in prison, four years for stealing and one year for causing damage, which is to run concurrently.

On the other hand, Carey and Wright, who were represented by Nathan Smith, were denied bail and remanded to The Bahamas Department of Correctional Services until July 1 and 2 for trial.