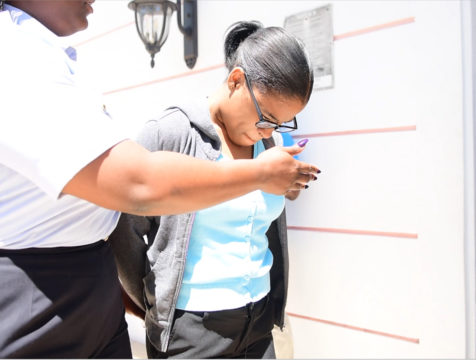 NASSAU, BAHAMAS – Shauna Smith, 22, appeared before magistrate Kara Turnquest-Deveaux on Monday, in connection with the February 25th accident that left a woman dead and man in serious condition in hospital.

Smith was charged with killing during the course of dangerous driving, failing to remain on the scene of an accident, driving without insurance and driving without a driver’s license.

Prosecutors allege that on the day in question, around 6.30a.m., Smith was driving a Nissan Cube and was heading east along Sea Link Drive in South Beach Estates when she hit two pedestrians.  Prosecutors further allege that Smith then fled the scene but a witness followed her, which resulted in a high-speed chase.

Smith then abandoned the car in a yard in South Beach and ran through nearby bushes, according to prosecutors.

She was arrested a short time later and was taken into custody.

The female, Diane Morgan, died on the scene.

Smith pleaded guilty to the charges.

Her lawyer, Leon Bethel explained to the court that Smith fled the scene because she was afraid for her life after a man allegedly threatened her for hitting the two pedestrians. He said Smith did not see the pedestrians because the windshield was foggy and the glare from the sun rising temporarily blinded her.

Smith also allegedly suffered abrasions to her hands and knees running through the bushes in fear for her life.

Smith’s roommate, Delanquie Johnson, the owner of the car was charged with allowing Smith to drive her vehicle without a driver’s license and without insurance. She was fined $250 on both counts or six months in prison.

Kranstone Simms, 24, a Defence Force officer was also charged with killing during the course of dangerous driving, driving without insurance and driving without a valid driver’s license in connection with the February 28thdeath of 17-year-old Bernard Sanders.

Police said Simms was driving a 2008 Cube on Frank Watson Boulevard when he lost control of the vehicle and collided into several trees before the vehicle turned over. The back seat driver was thrown from the car and died on the scene.

Simms’ lawyer B’jorn Ferguson told the magistrate that his client was an upstanding citizen who mentored young boys and operated a charity. He also said Simms was punishing himself as the victim was his friend and no punishment could bring the teen back to life.

He was fined $10,000 or one year in prison on the first count and $250 and three months in prison for the other two counts.