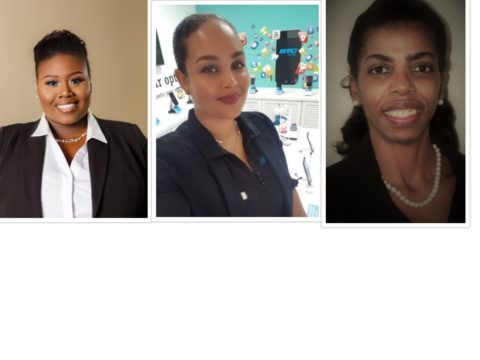 Myra has been promoted to Senior Manager in the Project Management Office, Diane to Manager of Retail for Exuma, Long Island and the South East Islands and Tequelana has moved into the role of Manager for Channel Management.

CEO, Garfield Sinclair said, “BTC is continuing to build a culture where we recognize and reward our team members who are excelling and adding value to the organization every day. We are indeed proud of Myra, Diane and Tequelana and look forward to seeing more great things from them in their new positions.”

Myra began her tenure with BTC in 1980 as a Computer Operator. She was promoted to a Computer Programmer in 1984, and worked in the Computer Department from 1987-1995.

She served as the Manager of Billing Operations and support from 1995-2009. She then worked in the Project Management Office in 2013 and managed several large projects for the organization. She has now transitioned to the role of Senior Manager in the Project Management Office. Myra has a number of certifications including, Certified Professional Manager (CM) and Certified International Project Manager (CIPM).  She is motivated by collaboration with positive, forward-thinking individuals and cohesive teamwork for a desired outcome.

Diane Lockhart was promoted to Retail Manager for Exuma, Long Island and the South East Bahamas. In this role, she will be responsible for managing all retail operations in those islands. Since she joined the organization fourteen years ago, Diane has worked in Long Island in the Customer Service Department and she also crossed trained in the technical and retail departments. She also spent four years with the Marketing and Public Relations team before returning to Customer Service in Long Island. Diane credits her success to God, her supportive husband and her daughters. Her advice to students pursuing a career in telecommunications is, “Follow your passion and start learning now. Use the internet for good, educate yourself, keep an open mind and a teachable attitude, and no one can stop you!”

Tequelana Gibson joined BTC in 2006 as a Marketing Intern. Since then she has had the opportunity to work on several major initiatives including the 2007 “BTC Tradeshow and Expo”, and the “Make the Switch from TDMA to GSM” campaign. She has worked in the Business Intelligence Unit, Mobile Research and Development, Product Development and Mobile.

In her new role as Channel Manager, she is responsible for the end-to-end management for all mobile products, including devices, SIM cards and phone cards. She is also responsible for product selection, testing, forecasting, ordering, and pricing. As a millennial, Tequelana says, “I’ve always had strong women to lead and mentor me through my journey at BTC. This definitely motivates me to continue to develop into a strong leader and mentor those that work alongside me.”

The entire BTC family is proud of the accomplishments of Myra, Diane and Tequelana and wishes them all the best in their new roles.