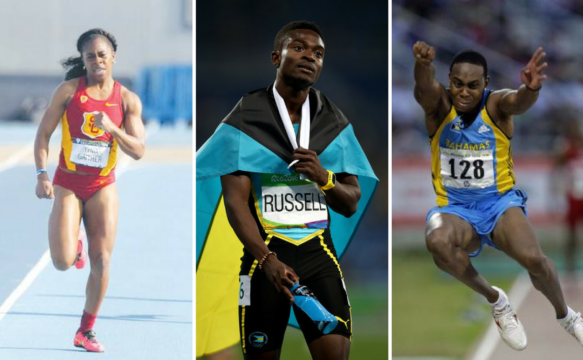 Three of the country’s premier track and field athletes competed at the 2018 Grenada Invitational over the weekend in St. George’s, Grenada.

American Tori Bowie won the race in 22.75 seconds, followed by Mariley Sanchez from the Dominican Republic, in 23.60 seconds.

Alonzo Russell was fifth overall in the final of the men’s 400 in 46.25 seconds. Hometown athlete Bralon Taplin won the 400 in 45.29 seconds, Luguelin Santo from the Dominican Republic, was second in 45.66 seconds, while Nery Brenes from Costa Rica, took home a bronze medal in 45.73 seconds.

Over on the field, Olympian Leevan Sands came sixth in the men’s long jump, with a mark of 7.30m. American Mike Hartfield won gold with a mark of 8.02m, Lester Lescay from Cuba took second with a leap of 7.95m, and Jamaican Damar Forbes scored a bronze medal with a mark of 7.93m.

Although he didn’t compete in Grenada, high jumper Donald Thomas also had an impressive showing over the weekend.

Thomas won the event at the War Eagle Invitational in Auburn, Alabama, with a leap of 2.31m.

Had Thomas been able to hit that mark last week at the 2018 Commonwealth Games in Gold Coast, Australia, he would have come away with at least a silver medal.

Shelby McEwen from the University of Alabama, was second at the War Eagle Invitational with a leap of 2.25m, followed by DJ Smith who competed unattached, with a mark of 2.19m.