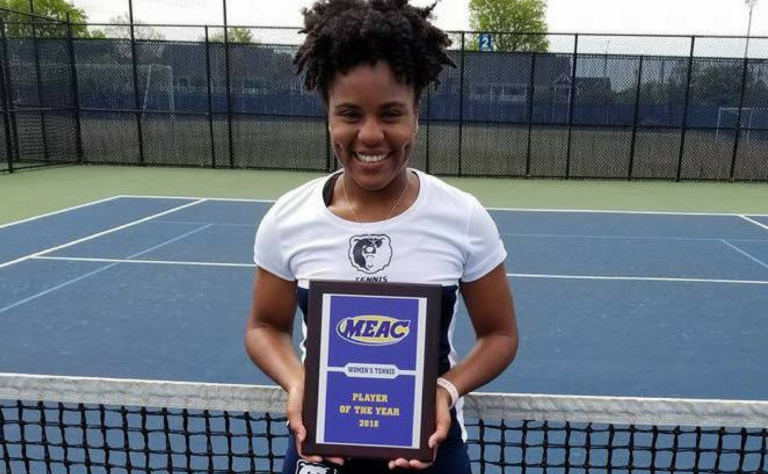 Awards continue to roll in for Danielle Thompson, a senior at Morgan State University, after she received athlete of the week honors for the third time last Monday.

Thompson this week, was named the 2018 Mid-Eastern Athletic Conference (MEAC) Player of the Year in women’s tennis, as announced by the league office in Norfolk, Virginia.

Thompson, who was also named to the All-MEAC first team, becomes the first Lady Bear to receive first-team honours since 2013.

“She’s played nothing short of excellent for the entire year. She’s led these ladies in every aspect and it’s only right that she goes out on top. I’ve been blessed to have her in this program, and we will surely miss her in the fall.”

In individual play, Thompson went 14-7 at No. 1 singles to lead the MEAC in total singles victories. She concluded the regular season going 9-1 in her final 10 matches, including a seven-match winning streak and was a perfect 6-0 in MEAC Northern Division play.

She recorded her 52nd career singles victory, a modern-day Morgan State school record, following a 6-1, 6-2 victory over Sarah Adewumi of Maryland Eastern Shore in the season finale and last home contest for Thompson at the university.

The win was Thompson’s seventh straight and helped the Lady Bears secure the No. 2 seed out of the northern division for the MEAC Tennis Championships, which take place this week at Folkes-Stevens Tennis Center at Old Dominion in Norfolk.

In doubles action, Thompson spent the majority of the season paired with sophomore Peggy Rooke at the No.1 and No. 2 doubles positions. The two would go a combined 9-4, including 4-0 at the No. 2 spot and finished 4-0 in MEAC action.