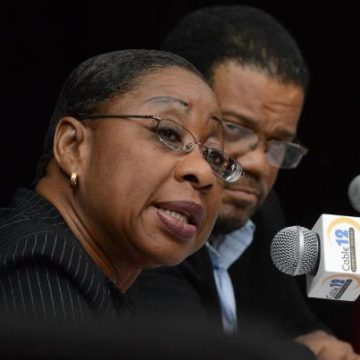 According to reports, the former Chairman of the National Training Agency (NTA) died shortly after 10:00 a.m. Police have classified her passing as a sudden death.

Described as national treasure, condolences poured in for the educator, parliamentarian and advocate, moments after the nation learned of her death.

House speaker Halson Moultrie said the country lost one of its greatest daughters.

“Her passing constitutes a great loss to the Free National Movement (FNM), the Women’s Suffrage Movement, this Parliamentary Institution and the Commonwealth of The Bahamas,” he said.

“She was a former minister,” Dr. Minnis said, “a member of parliament in the FNM government. She has made a great contribution not only to the FNM but to this country.”

In a statement, FNM Chairman Carl Culmer described Moxey-Ingraham as a Bahamian icon who will be remembered as a faithful and dedicated woman.

“Theresa Moxey-Ingraham was an extremely courageous woman to be revered. She will always be remembered for her infectious laughter and sound advice,” he said.

“She fought the good fight and has gone now from labor to eternal rest.”

Progressive Liberal Party (PLP) Leader Phillip Davis also expressed condolences to the family of a woman he called a faithful solider and said, part of her legacy in building a better Bahamas was her advocacy for equality.

“As fellow parliamentarian, I have fond memories of our animated and lively debates in the House of Assembly, as we legislated laws and formulated policies in our quest to build a better Bahamas,” Davis said.

“We did not always agree on policy issues but it was clear that we desired a better Bahamas and worked tirelessly toward that common goal.”

Moxey-Ingraham was as a high school teacher until 1982. After that time, she moved on in her role as educator to teach at Bahamas Business College, Hotel Training College and Institute of Accounting and Finance.

She served as vice president of the Women’s Association of The Bahamas before becoming a Senator in 1987; then leader of opposition business in the Senate from 1988-1992 and a member of parliament for Golden Gates in 1992.

She became minister of transport and communications from 1992, a post she held for two years before she became the minister of social development and National Insurance from 1994-1995.

Her portfolio also included minister of health and environment from 1995-1997; minister of labor, immigration and training in 1997 and minister of agriculture, commerce and industry.

More recently, Moxey-Ingraham served as the chairperson of the NTA.

She is survived by her mother and daughter Odia.