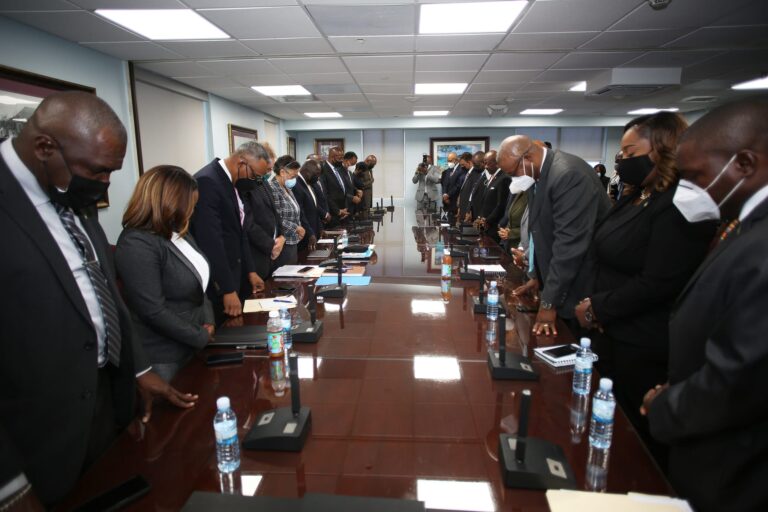 NASSAU, BAHAMAS — Fresh off the heels of a landslide win that all but reversed the FNM’s 2017 sweep, newly minted Prime Minister Philip Davis has also seemingly turned back the clock to the era of large, over-stuffed administrations.

Davis doled out a whopping 22 appointments last week, inclusive of himself and his deputy, with an additional seven parliamentary secretary titles that have effectively reduced his backbench to three members. By law, he only needed seven ministers to join himself and the Attorney General. He takes it one more over the line than previous Christie and Ingraham administrations that saw 21 ministers appointed. However, Christie appointed just three parliamentary secretaries in 2012, while Ingraham’s 2007 cabinet was later cut down to just 17 members.

One former FNM Cabinet minister said: “Remember when we did the Fiscal Responsibility Bill, they said they would not follow it and they would repeal it if elected to government — that gave us an early indication of the modus operandi. So adding this Gussie Mae Cabinet, those of us who want to give them an opportunity, the state of finances are obvious for anyone with the interest — they would have seen what such addition of large cabinet meant to the numbers. While the amount is immaterial in the scheme of things, where the costs start to add up are the support services and accommodations.”

The former minister added: “In addition to that there’s the dysfunction that’s likely to happen as a result of having so many voices at the table. Even with the 18 that we had, we found it hard to make a decision, it slowed down government works and decisions necessary even to address critical priority issues.”

Notwithstanding the absurdity of swelling the budget of executive government when the country is all but on burn notice from rating agencies, it also begs the question of the nature of the support Davis enjoys from his parliamentary caucus.

For some, the move signals that Davis has caved in to pressure to satisfy all the different members of Parliament, knowingly and dramatically reducing any backbench.

Is this a direct response to Minnis’ trials in the Lower House, most notably the blowback he received from those who felt passed over or denied; or is it a more noble move to efficiently train newcomers? Do we really have the luxury to nurse baby politicians on the public purse, effectively footing the bill of sorely needed succession planning?

Moreover, the size of this Cabinet dilutes the impact of the historic women appointments. Five women were appointed, but three more men were added to the list.

“One can assume the idea is to expose the younger members, newer members to the workings of the government,” said former PLP MP and cabinet minister George Smith.

“The task ahead is great we have the pandemic we have the economy is in the doldrums, massive debt to cope with, all of these things and maybe the more people you have giving thought and concentration to the various problems we are faced with, more is better than few.”

As for austerity measures, Smith suggested the government cut the $100,000 constituency allowance for parliamentarians, which he feels is poorly regulated.

He continued: “It’s not what seems to be the ideal thing but the circumstances today means he’s [Davis] experimenting, he’s made some decisions, he’s going to go in this direction. Obviously, he knows that in time he has to cut the cloth a little tighter.

“I am prepared to give him the opportunity. He has done well, he took a defeated party at the lowest it had ever been and he united the party and brought the elements together.

Smith added: “The exercise was long and tedious, he has done it, he has gotten us this far. I am willing to give him the benefit of the doubt. It isn’t how many, it’s the quality, let’s wait and see the quality of the ministers.”

Davis’ defense of his ‘Gussie Mae’ Cabinet is in line with previous administrations: more hands are needed at the helm to help steer a multi-faceted approach to the multitude of issues plaguing the nation.

But the justification for this thinly-veiled political stimulus package doesn’t ring true when past experience has shown us that too many cooks ultimately leads to inaction, and to a greater extent, cannibalism.

“If I can remember I think Mr Ingraham had a comparable size Cabinet like this before, or it may have been a little larger. I understand why they have the large cabinets because they cover a lot of different areas and they would want someone to focus on each aspect of their portfolio.

“The only issue I see is that it will be difficult for the Parliament to keep one of its constitutional mandates, that is to keep the Cabinet and the government responsible. Most parliaments will do that with backbenchers and opposition to keep the government accountable. You do that by asking questions in the House and we should have committees that have oversight of each government ministry but we don’t have that and with this small backbench and small opposition parties it’s very difficult to do that.”

On salaries, Tynes added: “You want your ministers to be productive and competent so you have to pay people. I think the emoluments that the parliamentarians get is very small. You need people to attract people who will work.”

The PLP sprang to action with a data-driven national campaign that saw some of its candidates put boots on the ground in their respective constituencies since as early as 2019.

Amid calls for Seabreeze MP Leslia Miller-Brice to be given her due, are we to believe that the only way parliamentarians can effectively address the country’s ills is around the Cabinet table?

It will be interesting to see whether the government will seek to amend the regulatory framework that reportedly bars her from governance due to her ties to the gaming industry; however, there are all sorts of creative ways to bring individuals into the fold.

However, Eyewitness News was told that Fitzgerald was only present to assist with the assessment of the various departments and that there has been no official announcement yet. 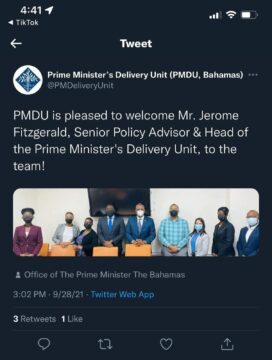 It is no secret that the thirst for leadership within the Bahamian political structure is at its most potent within a party’s executive ranks, but unlike Minnis, most of Davis’ contenders are also equipped with proven public records and a clear mandate from the electorate.

At least five sitting Cabinet ministers have previously publicly expressed their desire or willingness to lead the party.

Glenys Hanna-Martin’s sweep in Englerston is unsurprising but perhaps ironic given the party swept into office using the slogan of her 2017 leadership bid: “It’s a New Day”.

By giving everyone something to do, perhaps Davis will have effectively staved off inevitable political mischief that could at the very least threaten his legacy and at the extreme, retard the country’s progress.

Either way, the optics do not bode well for hopes that he will be able to keep a firm and fearless grip on governance and continue to reign in spending if his first move appears to be a post-election quid pro quo.

For incoming Director of Communications in the Office of the Prime Minister Latrae Rahming, the large size is indicative only of the magnitude of the task ahead.

“The PLP has a blueprint that it has to execute,” Rahming said.

“We need to be in the position to respond efficiently and effectively to the multiple issues on multiple fronts. The most important question we should be concerned about is whether this is going to be prudent spending of resources. I wouldn’t describe it as bureaucracy, what you have is leadership more than anything else. You have people who are leading the government, persons who are competent enough to execute government policy across the public service.”

Rahming added: “The size of its really discretionary, but how we rationalized this one is the country has so many issues and we need to be able to address all of those issues as efficiently and urgently as we can. We have to be able to skip, walk and chew gum at the same time.”

And while on the topic of gum, the outcome of the FNM’s executive council last week demonstrates yet again both the former prime minister’s political mastery and the extent of the party’s utter disconnect from reality.

Minnis declared his return as leader of the Opposition in the same breath as his acknowledgment of his party’s crushing defeat at the polls, and with it the full-throated, irrefutable rejection of his leadership.

According to members in the room, Minnis’ argument rests on his legislative experience as he sought to convince his parliamentary colleagues that he was best suited to lead the fight in the Lower Chamber.

Given the pervading criticism that the former prime minister kept all things close to the chest, it could be true that Minnis may be the only one who knows where all the bodies are buried. But as he heads to the cemetery to exhume those graves, are we really expected to believe that he will also dig his own?

With a muzzled backbench, and an Official Opposition wandering the existential desert, Bahamians must become intimately involved in the political process if there is to be true accountability to lofty campaign promises. Such engagement or lack thereof would prove to be the catalyzing agent for how quickly, if at all, this gold rush turns to rust.

“Now the public has every right to expect every single one of them to perform to the high standard they swore to uphold and discharge,” Smith added, “and if they don’t then the heavy hand of discipline ought to befall them, and there are people in the PLP who will encourage the prime minister to certainly monitor these things so the public is not left with short end of the stick.”

The Read is a weekly editorial column by our Head of Digital Ava Turnquest.