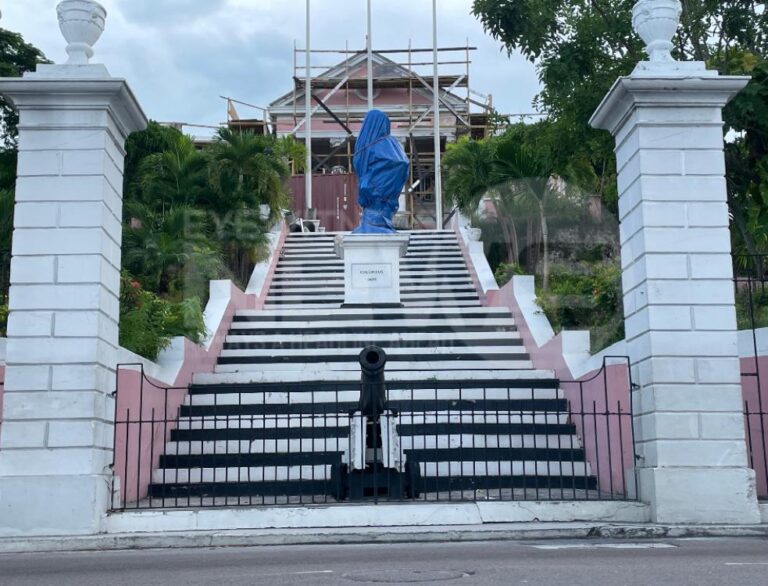 The Christopher Columbus statue at Government House is covered up after a man allegedly used a sledgehammer to remove one of its arms and one of its legs on Saturday, October 9, 2021.

NASSAU, BAHAMAS — In Christianity, the archangel Michael is depicted as a great captain and warrior protecting the children of Israel from the forces of evil. In the Book of Revelation, Michael leads angels in a victorious struggle over the devil, who is cast out of heaven. Shervandaze Smith took a sledgehammer to the Christopher Columbus statue, dubbing himself “archangel”, on Saturday. With it, he channeled the national discontent and rage of an entire country as he swung the sledgehammer over his head and brought it crashing down on the expired monument.

The discontent has remained choked behind a COVID-19 mask but palpable as the muggy end-of-hurricane-season weather. The rage has been bubbling at the surface, bursting to the forefront when hundreds of protestors flooded Bay Street chanting “enough is enough” only to be led to a thinly-veiled election rally at Pompey Square.

It is hard not to valorize Smith for an act that many have voiced over the years, but it is perhaps even more prophetic if the act was motivated by mental health failings and not some deep-seated radical passion.

Yesterday, Smith’s mother, Sheryl Brown, made an appeal to the court for him to have a psychiatric assessment, telling the judge that he has had episodes in the past and the family was concerned that he is no longer the man he used to be.

“We have not seen that person,” she told the chief magistrate.

But Brown said her son has never been examined despite the first instance of abnormal behavior occurring two years ago.

With this to consider, Smith’s actions feel even more symbolic of both the symptom and cure for the country’s postcolonial malaise.

His rant leading up to and following his arrest seemed wild and raving but was singularly focused on his objective.

For his part, Smith said God touched him and he’s not afraid to plead guilty.

Chief Magistrate Joyann Ferguson-Pratt did not take his plea over trespassing and damage charges related to the statue — waiting instead on the results of his assessment.

Ferguson-Pratt, however, advised there was a moratorium on admissions at Sandilands Rehabilitation Centre due to a lack of space.

Smith would have to be remanded to the Bahamas Department of Correctional Services for the evaluation unless space becomes available at Sandilands.

How can we even begin to unpack the irony that it took a man suffering from illness to boldly demonstrate national conviction when we literally cannot house him?

When asked to consider the Black experience in America, author James Baldwin said in 1961:

“To be a Negro in this country and to be relatively conscious is to be in a state of rage almost, almost all of the time — and in one’s work. And part of the rage is this: It isn’t only what is happening to you. But it’s what’s happening all around you and all of the time in the face of the most extraordinary and criminal indifference, indifference of most white people in this country, and their ignorance.”

When considering Smith In this vein, can the intent and its catalyst be separated?

There is no need to litigate Columbus’ record and well-documented atrocities. Discovery Day has been replaced by National Heroes Day in 2013. However, it is important to interrogate our own beliefs on sovereignty and activism before his actions are swept under the rug of time and smoothed over by inaction. Why are we still reckoning with large colonial statues that dwarf national monuments in their stature and positioning some eight years after discarding the holiday? Why haven’t we introduced new texts that fully contextualize Columbus’ tyranny on the ‘new world’?

More importantly, why must Bahamians be driven to our absolute breaking point before we feel as though we can be fully heard in our country? It is the very same reason why Surrey horses have for so long been forced to traverse heavy traffic in a system that can never be humane based on existing conditions. The long answer can be found in academic texts, but the short answer is tourism. Our tourism product is rooted in our colonial heritage, from which the celebration of our independence and cultural heritage flows. It is our primary industry, and primary vehicle to not only attract visitors but educate our people on what aspects of Bahamian-ness truly matter.

“Our problem in The Bahamas is that we do not listen to our people,” said National Heroes Committee Chairman Reverend Canon Sebastian Campbell.

“We talk about ‘it’s the people’s time’ or ‘listening to the voice of the people’ — that does not happen in The Bahamas. Persons speak and you’re in the wilderness and no one pays attention to the views you are expressing. If you are talking this language for 30 years, how come no government minister ever called us in for a debate? How come 15,000 persons and climbing have asked for the removal of the statue and yet there is no conversation on it? And so, when everything else fails, then people end up reacting and speak the only language it seems as though people understand.”

Campbell continued: “Remember, we have to put this in historical context as well. We see this frustration going on in our society and leaders taking these extreme examples in order to make things happen. We have had a leader who went to Paradise Island with his group of people and destroyed the fence. We have had Milo Butler throw the hourglass through the window of the House of Assembly, Lynden Pindling throw the mace through the window of the House of Assembly, the list goes on. We do not listen to our people and in the end, then they take extreme measures.”

It’s worth noting that in 2016, Free National Movement (FNM) Leader Dr Hubert Minnis supported both We March and the Cabbage Beach vendors and protestors who ceremoniously ripped down the fence at the beach entrance point on Casino Drive. As of yesterday, there were more than 16,000 signatures on the online petition to remove Columbus from Mount Fitzwilliam. Now is the perfect time for Minnis, then and now opposition leader, to step in to give this movement the political boost it needs given that he is reportedly singularly focused on amassing support for another leadership run.

University of The Bahamas (UB) history professor Dr Christopher Curry is hopeful the incident will serve as a catalyst for legislation to relegate colonial relics to museums and address the absence of a national heroes park.

“In this whole conversation about heroes and destruction of the statue, I want to say that we have to never perfume the past,” said Curry.

“There has been a tendency to, what that means is, we try to present The Bahamas as almost an exceptionalism rhetoric. They say slavery was better in The Bahamas, we say we didn’t go through race relations as bad as it was in the US or in Jamaica, but truth be told, what we end up doing is sweeping under the proverbial rug a lot of our issues, a lot of the works of our past. To get to the idea of a balanced history, you have to tell the good, the bad and the ugly because if you don’t, then you’re not being true to yourself.”

In her doctoral thesis “Navigations: The Fluidity of Identity in the Post-Colonial Bahamas”, former director general of culture Dr Nicolette Bethel considers Bahamian identity within a “geographically fragmented, multi-ethnic, postcolonial state”. She ultimately reckons that this identity mirrors the country’s physical archipelago, allowing Bahamians to “migrate” through multiple realities, noting “in various tales about Bahamian national identity, one may find different emphases which can provide each individual inhabitant with her own sense of belonging”.

Bethel writes: “In a country where radio talk show hosts determine the decisions taken by government officials and analytical texts are relegated to college classrooms or embattled conclaves of academics, the validity of a tale resides in its telling.”

To be clear, the symptom is our inaction and refusal to prioritize our sovereign institutions like health and education and the cure is, and always will be, political action. It is time to not only speak in the language that people understand but to do so loudly.