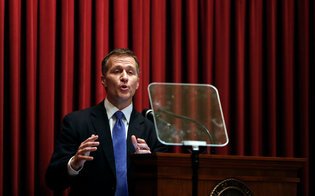 Missouri’s governor, Eric Greitens, in January. A photo from an extramarital affair has led to his indictment on a felony charge. Credit Jeff Roberson/Associated Press

So people, how do you think the sex scandal in Missouri will affect the Democrats’ attempt to take control of the Senate?

That was actually a test. Which part of the sentence got your attention? Sex or the fate of the November elections? I’ll bet that tells a lot about your character.

Actually, it’s easy to talk about both. The House could change hands! If it does, do you think it will involve the Pennsylvania district where Republican Tim Murphy, a strong anti-abortion conservative, had to resign after he got caught urging his lover to have an abortion if she got pregnant? Or the district next door, where the former lover has announced she’s running against a Democratic incumbent?

Everything’s a tea leaf, simmering in sex. This week Linda Belcher, a Democrat, won a special election for the Kentucky State House of Representatives in a rural district that had previously been controlled by a Republican. This was seen in some circles as a sign that the Democrats were going to ride an anti-Trump wave in November and retake control of Congress.

“The results here show that if we can win in this district we can win anywhere,” said the chairman of the Kentucky Democratic Party.

Well, there were a couple of details. Belcher had actually represented the district before, then lost in 2016 to Dan Johnson, a right-wing Republican whose Facebook posts included one depicting the Obamas as apes and another announcing: “Allah sucks. Mohammed sucks. Islam sucks.”

Johnson, who was also the bishop of an evangelical church, killed himself in December after he was accused of sexually assaulting a 17-year-old parishioner. Belcher defeated his widow, who is refusing to concede, claiming “widespread voter fraud.”

This does feel kind of … unique to be a bellwether.

The Missouri story has the advantage of being way less depressing. The sex appears to have been totally consensual until the point when the governor tied his naked lover to a piece of exercise equipment and took her picture.

See, you’re already getting interested and I haven’t gotten anywhere near the connection to the November Senate races.

Gov. Eric Greitens, a Republican, is a 43-year-old up-and-comer who was rumored to nurture presidential aspirations until the recent unpleasantness. In his campaign announcement he introduced himself as “a Navy SEAL, native Missourian and most importantly, a proud husband and father.”

Now, he admits that when he was gearing up to run for office in 2015, he had an affair with his hair stylist. We are a pretty jaded country at this point, and this news alone would hardly be the sort of thing that would cause his constituents to faint. Or even, probably, mention over coffee.

As usual, the problem came with the details. Greitens, according to the story everyone in Missouri who is not in a coma now knows, invited the woman to his home for a series of assignations — presumably when the wife and kids were off premises. At one point he took her into the exercise room for sex, taped her hands to some rings, blindfolded her and then … snapped her picture.

“He said, ‘You’re never going to mention my name,’” the woman recounted later. Otherwise, she said, the governor warned “there will be pictures of me everywhere.” This was during a confession to her husband, who secretly taped the whole thing. Really, I think it’s possible to feel sorry for the hair stylist.

This week, a grand jury indicted Greitens for taking the picture “in a manner that allowed access to that image via a computer.” Which turns out to be a felony.

Greitens’s wife, Sheena, is standing by him. The governor is going around talking about his tax plan, which does not seem to be the first thing on most people’s minds. The Republican-dominated legislature is gearing up for inquiries, possibly with an eye to impeachment.

This story leaves those of us who do not live in Missouri with several questions. One of which, of course, is, “What kind of person is this?” Another is whether the scandal will have any effect on the upcoming Missouri Senate race, in which Senator Claire McCaskill is one of the most vulnerable of all the Democrats running for re-election.

Her opponent, Attorney General Josh Hawley, has strong connections with Greitens and something of a history of attempting to be holier-than-thou on matters relating to sex.

Hawley has criticized McCaskill for not being faster to call for Senator Al Franken to resign, but he still hasn’t demanded that his governor step down. Just this week he attempted to link McCaskill with Harvey Weinstein, claiming that she gave Weinstein “a taxpayer-funded advertisement for his movie.” This would have been a meeting McCaskill had in 2014 with Philomena Lee, a woman whose attempts to find the baby she’d given up for adoption in her youth had been made into a Weinstein film.

So far we have a photos-of-naked-woman-taped-to-exercise-rings sex scandal on the Republican side and a meeting to talk about adoption issues for the Democrat.

Can’t wait to see what happens next. Maybe another state can come up with sadomasochism in the sauna.

This article was written by GAIL COLLINS, New York Times Op-Ed Columnist and reposted from www.nytimes.com