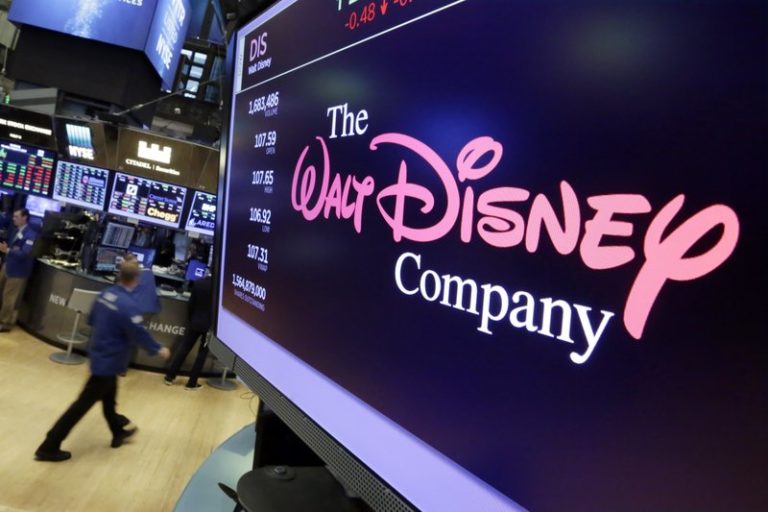 FILE - In this Aug. 8, 2017, file photo, The Walt Disney Co. logo appears on a screen above the floor of the New York Stock Exchange. Disney is making a $70.3 billion counter bid for Fox’s entertainment businesses following Comcast’s $65 billion offer for the company. (AP Photo/Richard Drew, File)

NEW YORK (AP) — The mouse is chasing the fox.

Disney is offering more than $71 billion for Fox’s entertainment businesses in a counterbid to Comcast’s nearly $66 billion offer.

The battle for Twenty-First Century Fox reflects a new imperative among entertainment and telecommunications firms. They are amassing ever more programming to better compete with technology companies such as Amazon and Netflix for viewers’ attention — and dollars. The bidding war comes after AT&T bought Time Warner for $81 billion.

Disney’s move had been expected since Comcast made its bid last week. Disney said it’s raising its offer because Fox’s value increased due to “tax reform and operating improvements.”

“After six months of integration planning we’re even more enthusiastic and confident in the strategic fit,” CEO Bob Iger said in a statement.

If Disney prevails, “Avatar” and other movies from Fox’s studios would help beef up Disney’s upcoming streaming service. Disney, which already owns Marvel, would get back the characters previously licensed to Fox, setting the stage for X-Men and the Avengers to appear together. If Comcast wins, it would get a larger portfolio of cable channels including FX and National Geographic.

In a call with analysts, Iger said he believes Disney’s bid is superior to Comcast’s from a regulatory perspective. He said that six months of dealing with regulators both in the U.S. and internationally has given Disney a “meaningful head start.”

Comcast, based in Philadelphia, did not immediately respond to a request for comment. Fox previously rejected a bid from an unnamed company, widely believed to be Comcast, because of fears it would face regulatory objections. But a federal judge’s approval of AT&T’s bid for Time Warner signals that the government might have difficulties mounting antitrust challenges.

Just how high can the bidding war go? GBH Insights analyst Dan Ives said he thinks the “line in the sand” is $75 billion to $80 billion.

“Above $80 billion would be a tough pill to swallow for Disney shareholders given the steep price,” he said. “That said, this poker game appears to be just getting started.”

Disney’s original all-stock offer in December was for $28 per Fox share. That offer is now valued at $52.6 billion based on the latest number of outstanding shares provided by Fox. Comcast countered last week with a $35-per-share all-cash offer, valued at $65.7 billion based on the same number of shares. Disney’s new offer of $38 per share, or $71.3 billion, is half cash and half stock.

The deal would include Fox movie and TV studios, some cable networks and international assets, but not Fox News Channel or the Fox television network.

Fox CEO Rupert Murdoch said the company “firmly believes” that the combination with Disney “will create one of the greatest, most innovative companies in the world.”

But the New York company said it is still weighing both offers and noted that Disney’s new bid doesn’t bar Fox from considering other offers.

Fox and Disney shareholders had been scheduled to vote on Disney’s original bid July 10, but that meeting has been postponed.